One day on our vacation in Virginia we decided to take a harbor cruise just for the fun of it, and to see what we could see.

One of the things we saw was a lot of naval vessels in the Norfolk Navy Yard. Jo Ann was particularly happy to see CVN-65, the USS Enterprise, the “Big E”, the U.S. Navy's, and the world’s, first nuclear-powered aircraft carrier, in port.

Another ship was one that had a very distinctive silhouette. As we got closer, we were informed that it was the HMS Ark Royal,* with its characteristic jump ramp on the bow for its contingent of Sea Harrier VTOL/STOVL aircraft.

This was just too cool for me: partly because the Harrier is one of my favorite military aircraft and has been for a long time (I remember reading an article back in the mid-1960’s about the Tri-Partite Evaluation Squadron of British, American, and German pilots who were evaluating the Harrier for their respective countries); and partly because it was the biplanes flying from an earlier namesake, another HMS Ark Royal, which stopped the German battleship Bismark in its tracks in the North Atlantic.

As we got closer, I couldn’t find her name anywhere on her, except on the gangway between her and the dock which her sailors, pilots, and other personnel used to embark and debark. But there, on the side of her forward smokestack, was her badge, an ark royally crowned. 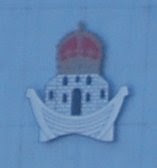 How cool is that!  It's not every day that you run across British heraldry in North America being used in something other than an historical setting.


* This Ark Royal is the fifth ship of that name in the history of the Royal Navy, the first being built for Sir Walter Raleigh and which saw action against the Spanish Armada in 1588.
Posted by David B. Appleton at 6:00 AM