Another bit of historic heraldry at The Mariners' Museum can be found in a print (made contemporaneously) of the funeral barge which carried the body of Admiral Horatio Nelson from Greenwich to Whitehall on January 8, 1806. 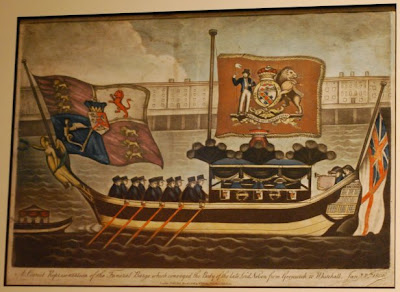 In addition to the White Ensign flying at the stern of the barge (not unlike the White Ensign flying from the stern of the HMS Ark Royal, about which we blogged here on August 12), we have the Royal Arms flying from the bow, and from a mast at the center, a flag or banner with Nelson’s complete achievement of arms, with the arms and his two augmentations (soon to be three; the wavy fess with “Trafalgar” on it was granted after Nelson’s death to his heir and older brother, William), encircled by the Order of the Bath, ensigned with the coronet of a Viscount, and accompanied by supporters and a motto.
Posted by David B. Appleton at 6:00 AM