While we were in Virginia, I simply _had_ to go to The Mariners’ Museum. For one thing, that’s where they have all of the bits and pieces that have been brought up from the USS Monitor, the Civil War ironclad (the little one, the “cheesebox on a raft”) that helped to revolutionize the design of warships ever since, and I’ve been fascinated by it, and the other ironclad ships being built at that time, for more years than I care to remember. (Let’s just say that I really understand my father’s old saw about getting up in the morning, going into the bathroom, and wondering who that old guy in the mirror is!)

So, anyway, having gotten my Monitor “fix” taken care of (did I tell you they have the actual turret from the Monitor there?  As well as a bit of its armor plate that you can actually touch?), we walked around the rest of the Museum looking at all of the other exhibits they have, some of which included … wait for it … heraldry.

One that caught my eye, for two reasons, was this one … 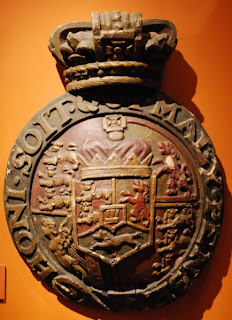 Now, don’t you all go getting up in arms about how they’ve mislabeled this particular artifact. (That was the second reason that it caught my eye, the first, naturally enough, being that it was a coat of arms.) I’ve already sent them a polite letter suggesting that what they have is not really the “seal of the Order of the Garter,” but rather is the Royal Arms of Great Britain as used from 1801-1816* by King George III, and encircled by the Garter as can be found even today on many depictions of the Royal Arms.

The real point here is, I think, that they’ve got a really cool piece of history here – the Royal Arms of Great Britain from HMS Victory, one of the most famous ships that ever sailed.


* Because those arms after 1816 had a crown on top of the inescutcheon instead of the Electoral Bonnet as here.
Posted by David B. Appleton at 6:00 AM