In a story published today in Aberdeen, Scotland's The Press and Journal, a right-wing political party has agreed to stop using an altered version of Aberdeen's coat of arms after learning that it could be prosecuted for doing so.

The Aberdeen National Front had been using the image on its website, until being contacted by Alexander Green, Procurator Fiscal of the Court of the Lord Lyon King of Arms, who explained to them that in Scotland, a person cannot display a coat of arms unless it has been registered by the Lyon Court in the Register of All Arms and Bearings in Scotland.  (Admittedly, they had been reported to the Lyon Court by the Aberdeen City Council, whose coat of arms was being modified and used by the ANF.  The City's arms are shown here, from an old postcard, circa 1905.) 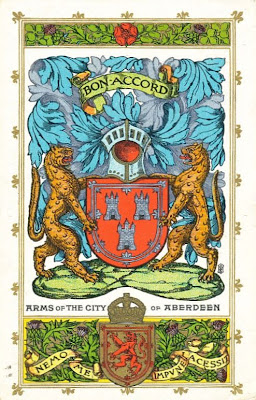 The ANF spokesman said that they'd vetted the logo before using it with their legal team in England.  I guess the moral of that story would be: Don't ask a lawyer in England about the use of heraldry in Scotland; Lord Lyon's authority to regulate arms in Scotland has teeth that the English heralds only wish they had.
More on the story can be found on-line at: http://www.pressandjournal.co.uk/Article.aspx/1866398?UserKey=#ixzz0wHK2WC7y
Posted by David B. Appleton at 10:40 AM