A February 5, 2010 article in the Perthshire Advertiser notes the return of "a long-lost heraldic shield", the arms of Lord Glenlyon (later the sixth Duke of Atholl) who had participated in the tournament organized by the Earl of Eglinton.  I've posted before (last September at http://blog.appletonstudios.com/2009/09/heraldry-for-sale.html and http://blog.appletonstudios.com/2009/09/heraldry-for-sale.html) about the rediscovery and sale of eight of the Eglinton shields.  Now, it seems that one of them (see image, below) is making its way home, to Blair Castle, seat of the Atholl dukes. 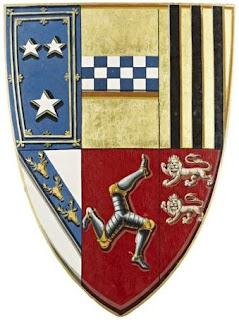 The full article can be found on-line here:  http://www.perthshireadvertiser.co.uk/perthshire-news/local-news-perthshire/perthshire/2010/02/05/heraldic-shield-returns-to-blair-castle-73103-25764163/
Posted by David B. Appleton at 3:16 PM