There's an article in the on-line version of The Whitstable Times of Whitstable, Kent, England today (February 4, 2010) about one of my favorite academic heralds, entitled Whitstable Pearl: Cecil Humphery-Smith.  The article can be found at: http://www.thisiskent.co.uk/whitstable/Whitstable-Pearl-Cecil-Humphery-Smith/article-1806096-detail/article.html  It gives just a little bit of background of the man, and then goes into a brief interview of him at his home in Seasalter. 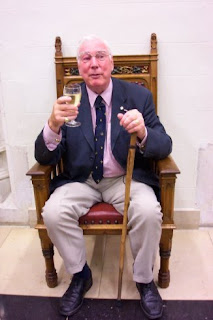 For those of you who don't know Mr. Humphrey-Smith other than as an author of several useful books on heraldry (Anglo-Norman Armory, Anglo-Norman Armory II, Armigerous Ancestors, among others), he is a remarkably knowledgeable man who has, hidden deep within himself, a wicked sense of humor.

In addition to owning several of his books (including all of those listed above), I have had the opportunity of meeting him at several of the International Congresses of Genealogical and Heraldic Sciences, most memorably at the ones in Turin, Italy; in Besançon, France; in Bruges, Belgium; and at St. Andrews, Scotland.

If I may tell a little story, at the Congress in Bruges in 2004 the lectures were on the second floor of the building and the between lectures refreshments were on the first (ground) floor.  There was an elevator, but it was both slow and overcrowded between lectures.  He was, at that time, getting around with the aid of a cane (as you can see in the photograph above that was taken the last day of the Congress in Bruges), but didn't want to wait for the elevator.  As several of us were walking with him towards the stairs, he asked if he might take my arm to steady himself as we went down the stairs, to which I readily assented.  As we arrived at the first floor, he thanked me, and I asked him if this made me "an heraldic supporter."  He chuckled, and headed off to the coffee table.  (But he didn't say, "No"!)
Anyway, check out the article.  It's a pleasant insight into one of the modern titans of heraldry.
Posted by David B. Appleton at 3:43 PM