I know that I’ve said this before, but periodically I have it confirmed, that you can find heraldry just about anywhere and everywhere. A recent case in point:

I was riding the elevator up to my work one day last week. (We’re now on the seventh floor of an eight-story building. When we were down on the fourth floor, I’d usually just walk up the stairs, telling myself that I needed the exercise. But seven is just a little too far to go. I kept having visions of someone finding my dead of a heart attack body in the stairwell somewhere between the fifth and sixth floors, so I take the elevator now.)

Anyway, someone else in the elevator was going to the sixth floor, and when the doors opened there for them to leave, I noticed a new office (so new that their number plate is a hand-lettered half sheet of paper) that had a framed grant of arms hanging on the wall in their reception area. So, of course, I did a quick double-take before the doors closed, since I just wasn’t expecting to see a grant of arms hanging up in the building where I work. And then made a mental note to myself to bring my camera to work and go down and ask if I might take some photographs. 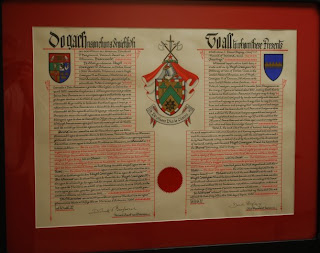 A couple of days later I had my camera with me, and went down to the sixth floor office, identified myself as (1) someone who worked just upstairs, and (2) as someone with a strong interest in heraldry (while giving the receptionist one of my Appleton Studios business cards), and asked if I might take some pictures of the grant. The receptionist called back to her boss and passed along my request. Permission being given (and I’d told them I would post one or two pictures on this blog), here are a couple of pictures for you of the grant of arms made April 19, 1985, by Donal Begley, then Chief Herald of Ireland, to Hugh Corrigan IV, attorney at law of Dallas, Texas. (The sprig of maple leaves in base on the mullet of eight points goes to the fact that Mr. Corrigan’s ancestor, Patrick Corrigan, emigrated from Ireland in 1832 to Canada.) 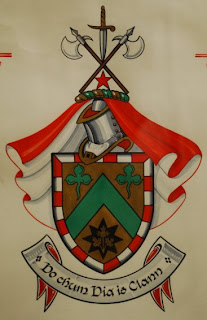 Mr. Corrigan has been very involved in researching his own genealogy and, from some of the entries I’ve seen by him or acknowledging his assistance, in helping others with their own genealogy on lines related to his. It was apparently after his having done a fair bit of this research that he decided to apply to the Chief Herald of Ireland for a grant of arms. And, of course, to pass along to his family.

But, my goodness, what a great thing to find on the way to work one day. It just goes to show once again that you can find heraldry everywhere.
Posted by David B. Appleton at 6:00 AM