I swear, I continue to be amazed at what you can sometimes find on the internet.

Now, you have to remember that my first introduction to a computer was back when I was first going to college, back in 19-mumble-mumble. I was attending Michigan State University, and the school had just finished constructing a building for its computer sciences department. It was a comparatively small, but four-story building, and the computer took up the entire third floor! (The Hollerith card punch machines were down on the first floor.) There was a little visitor’s space on the third floor where you go could and watch the computer at work, with all the blinking lights and whatnot. Today, of course, that computer is ridiculously out of date. I mean, my cell phone (yes, I now have one. I’m being dragged, kicking and screaming, into the 21st Century) has more computing power in it than that old IBM mainframe. As a consequence of that experience, it seems I sometimes have a tendency to be a bit amazed at how far we’ve come in the ensuing years. 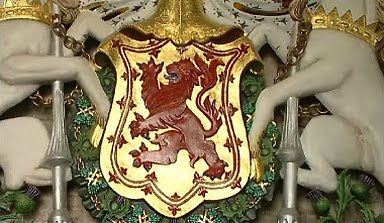 Anyway, to get back to my point, I ran across a video on the internet at the Scottish Parliament website that is of Romilly Squire (a _very_ active member of the Heraldry Society of Scotland and a very talented heraldic artist, in addition to being a really nice person) discussing the Scottish coat of arms, the “ruddy lion ramping in a field of gold” as it has sometimes been described, from the days before the Union with England. It is of particular interest since he describes the various parts of the achievement of arms (the shield, helm, crest, supporters, mottoes, and collar of the Order of St. Andrew) of the Kings and Queens of the Scots which now hangs in the Scottish Parliament building in Edinburgh. The video can be found at: http://www.scottish.parliament.uk/vli/holyrood/artist-videos11.htm

Please drop by and check it out!
Posted by David B. Appleton at 6:00 AM