Lyon & Turnbull, a fine arts auction house, has, among a whole lot of other cool stuff, some remarkable and historic heraldry up for bid. In the Fine & Decorative Furniture and Art - Sale 266 - Lot 281, are eight 'Eglinton Tournament' heraldic shields from the well-known tournament held in August 1839 by the Earl of Eglinton. These eight shields, in polychrome on wood, were hung in Eglinton Castle after the tournament. In the the 1920s, when the castle was partly demolished, some of the relics of the Tournament were sold at auction; these eight shields went to Skelmorlie, where, after some restoration work in the mid-20th Century, they adorned the walls of the Great Hall. More information about these historic shields can be found on the Lyon & Turnbull website at http://www.lyonandturnbull.com/asp/fullcatalogue.asp?salelot=266++++++281+&t=1826826&
Below is the shield of Lord Glenlyon (later the 6th Duke of Atholl). 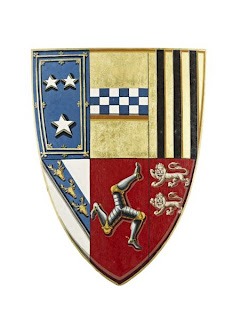