More (Mis)Use of Heraldry in the USA


The story in the on-line newspaper TPMMuckraker and several other websites was about a private security company calling itself the American Police Force taking over an empty jail in the small Montana town of Hardin, with plans to run the jail and build a proposed military and law enforcement training center on the property. Under a ten-year contract with the city, the APF will give sniper training and teach "DNA analysis" skills. (Mind you, the United States does not have an "American Police Force"; the closest to any official organization that might be considered to be such would be the Federal Bureau of Investigation, along with perhaps the Bureau of Alcohol, Tobacco, Firearms and Explosives and more recently, the Department of Homeland Security. All of which have their own coats of arms.)

What does all this have to do with the use, or misuse, of heraldry in the USofA? Well, just take a look at the APF’s coat of arms, from one of its vehicles. 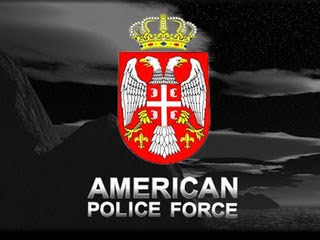 Anyone here recognize the coat of arms of Serbia? Right down to the gold fleurs-de-lis by the eagle's talons? Yes, I thought you might. (For those that don’t, see them on the Heraldry of the World website at: http://www.ngw.nl/int/yug/yu-nat.htm) Why use the arms of a sovereign nation for its logo? I have no idea. It seems like a remarkably poor idea to me, but then, how many people can recognize the arms and identify the nation to which they belong? In this country, alas, not that many.

This is not to say that the company is at all consistent in its symbology. This image can be found on their website (where they call themselves the American Private Police Force) at: http://www.americanpolicegroup.com/index.html (A word of warning: if you go to the site, you will get to listen to Ravel’s Bolero the entire time you’re there.) As you can see, this logo is similar to the one on their vehicles in Hardin, but lacks the charges on the shield. (And what is the eagle is carrying in its sinister claw? A cattle prod? To be used, I would have to assume, in "enhanced interrogation techniques"? Or is it "just" a sceptre?) 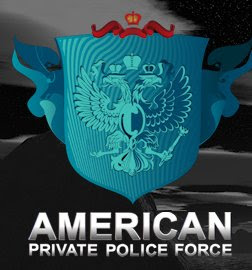