Yet Another Logo Supplants a Coat of Arms

There’s been a bit of a discussion going on at the rec.heraldry on-line newsgroup sparked by an October 7, 2009 article in The Telegraph about the UK Supreme Court’s new "emblem" which they propose to use instead of the Royal Coat of Arms. The article can be found at: http://www.telegraph.co.uk/news/newstopics/politics/lawandorder/6266742/Crown-sidelined-from-new-Supreme-Court.html
A copy of the new emblem and its meaning can be found on the website of the Supreme Court at: http://www.supremecourt.gov.uk/visiting/new-artwork.html 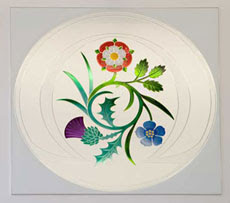 Now, that said, it’s not something that has just now been sprung on an unsuspecting public, though it not slated to be used until this month. Indeed, notice that the emblem had been approved for the Supreme Court by the Queen and placed on record at the College of Arms in London had appeared in the newsletter of the College of Arms in December 2008. A copy of that newsletter may be found on the College’s website at: http://www.college-of-arms.gov.uk/Newsletter/019.htm
But many heraldry enthusiasts decry the substitution of modern logos in the place of coats of arms. There is an article in Ireland’s Genealogical Gazette from February 2009 at http://www.docstoc.com/docs/4324120/Irelands-Genealogical-Gazette-(February-2009) discussing the new Supreme Court emblem and comparing it to the logo of the Irish Courts Service, and then lamenting, as I have done before in this blog (click the keyword "logos" near the bottom of the left-hand column for prior posts here on this topic), the adoption of commercial logos over the use of already-existing coats of arms and/or heraldic badges.
In this particular instance, while I applaud the incorporation of symbols to represent the often-overlooked (at least symbolically) stepchildren of the UK, Wales and Northern Ireland, it seems a shame to me that they felt that the Royal Arms, which have served so well as a symbol in so many other courts in the UK, could not be used here, and that they instead chose this somewhat abstract logo which by itself says nothing of the organization by which it will be used.
Posted by David B. Appleton at 8:30 AM