I had the opportunity early last week to get back out to America’s "Sin City", Las Vegas, Nevada, for a couple of days. (Now, before you get all excited for me, let me tell you, as my wife often repeats, "This isn’t the fun Vegas; this is the dusty city in the middle of the desert Vegas" where my parents - and my next-to-youngest son and his wife and new daughter - live. So we were visiting family, not partying and gambling our brains out.)
Still, we did manage to get out to the Strip to visit a couple of the major hotels out there. Which visit proved to me once again that you can find heraldry anywhere and everywhere.

For example, we were wandering around in Caesar’s Palace, just looking to see what we could see. We’d gone there because Jo Ann wanted to see some of the statuary that they’ve put up, and there was plenty of that. But as we wandered down this hall and up that way, we ran across the Cartier jewelry store. That by itself wasn’t particularly noteworthy (especially since they weren’t open yet), but on either side of their entrance was a coat of arms: to the left, Portugal; and to the right, Spain. Both done in gold on black veined marble, and even hatched (partially, anyway). 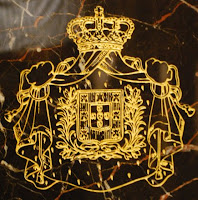 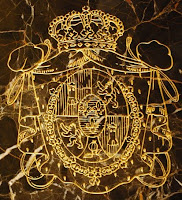 Then, down another hall around the corner, a very nice window display with a tapestry containing ... you guessed it! More heraldry. This time, the arms of France (well, sort of, with only two fleurs-de-lys instead of the expected three) and Navarre. 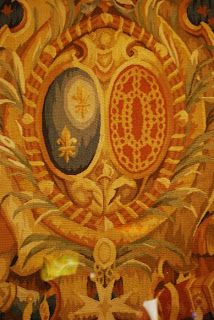 Not at all the sort of thing I expected to find early on a weekend morning in a hotel/casino on the Las Vegas Strip. Heraldry, it’s everywhere!
Posted by David B. Appleton at 8:30 AM