Okay, I’ll admit it. I’ve found heraldry in some odd places, places I never really expected to find a coat of arms, and yet, there they were. But these coats of arms pretty much take the cake for the "odd or unexpected place" category. We were finishing up dinner at the buffet in the Bellagio hotel on the Las Vegas Strip, and I needed to use the restroom. So off I went, a man on a mission.

And immediately after went back to our table, asked my wife to borrow her camera (because I wasn’t going to be taking any pictures, and had left mine back at our hotel), and headed right back to the restoom. Because, by golly, right there in the men’s room was heraldry! Just inside the entrance were four framed prints of sailing ships, each with a coat of arms (well, one of them might not really be considered to be armory, but still, it’s on an escutcheon). So I tried not to block the traffic in and out too much as I took photographs of the prints and then closeups of the shields on each of them. And here’s the combined results. 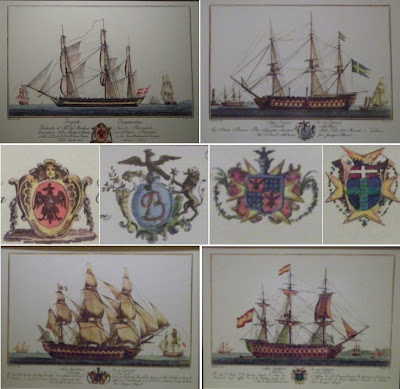 Heraldry. It’s insidious. It can be found anywhere. And everywhere. Including, as I found out, in the men’s room at the buffet in the Bellagio Hotel in Las Vegas, Nevada.
Posted by David B. Appleton at 8:30 AM