Finally! A Place for the Cabinet

I wrote some time back (on May 28, 2009) about having finished up a restoration project on a small half-circle display cabinet that we’d bought as a nice place to display some of the "crested china", small fairings with coats of arms on them, that we’d managed to purchase over the years. The trouble was, having finished the restoration/fix-up, I didn’t have a good place to put it. It didn’t fit decently anywhere in the heraldic library, and so it was going to take some thought - and probably some rearranging - to find a place for it.
Well, the other day we did it! It did take a little rearranging, but only a minimal amount. In the downstairs library (the heraldic library is upstairs) we have some cabinets that act as a long side table, with various prints and pictures and whatnot hanging on the wall above them. I took down one of the pictures we’d been talking about getting rid of for some time, moved the watercolor that was below it up, and Presto! Instant space for fairing cabinet. 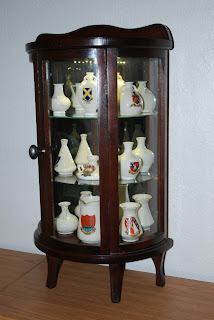 So, as you can see in the picture above, I’ve got the cabinet set up, plugged in (for the LED lights mounted underneath its top), and filled it with fairings. (There aren’t as many fairings and they aren’t as crowded as it looks like in the photo; the back wall of the cabinet is a mirror. It’s the reflections of the fairings off the mirror that make it look so full.) The flash unit of the camera tends to wash out the display lights of the cabinet, but you can still get a good idea of what it looks like from the photograph. Standing alone in the ambient light with the LED lights on, it’s pretty spectacular - in a not overpowering way - in the library.
(I swear, the way my "hobby" is filling up the house, I feel like I’m Captain Kirk of Star Trek hollering down to engineering, "More heraldry, Scotty! I need more heraldry!")
Posted by David B. Appleton at 8:30 AM