A small, but productive, meeting of heraldry enthusiasts

I had the chance last weekend to attend the first ever face-to-face meeting of some of the Texas members of the American Heraldry Society. For those of you not familiar with the AHS, it’s pretty much an on-line thing. I mean, we send in our dues every year (usually on-line, though you can pay them via U.S. Mail, too, I suppose). But the members are spread out all over this country (and a few others), and we don’t – yet – have annual general meetings in the manner of some of the longer-established heraldry societies. So this meeting was something of a novelty for the organization.
In any case, I got up at my usual time, had breakfast, and then hopped in the car for the three-hour drive to Austin (each way – six hours on the road for what turned out to be a four-hour meeting) to meet with fellow AHS members/heraldry enthusiasts. As it turns out, there were only three of us there (a fourth didn’t make it), but – and this is probably the weird thing – we all had a great time and I, for one, believe that the meeting was great! Apparently the others agreed with that assessment, because we’re going to do it again this fall, though the next one will be in Dallas rather than Austin. (We thought that moving it about the state would give more people the opportunity to participate over time.) 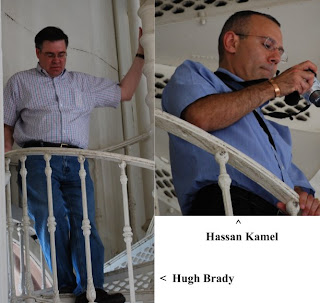 It was a reminder again to me how much fun, and interest, and education, can be stirred up in face-to-face meetings with other heraldry enthusiasts. It’s something I should know, I realize, but even though I’m a member I only occasionally get to attend the annual general meetings of the Royal Heraldry Society of Canada, and never yet to those of the Heraldry Society (England) or Heraldry Society of Scotland, while the International Congresses of Genealogical and Heraldic Sciences are held only every other year. But the immediacy, the give-and-take, the synergy that occurs during such meetings, in ways that can happen at best relatively slowly on-line, is truly wonderful, with the participants simultaneously gaining enthusiasm from others and sharing their own enthusiasm, as well as their knowledge and expertise in the field, discussing how far it has come and where it might be going, as well as possible future directions of the organization to which we belong. I mean, sure, it was fine that we got a bit of a "backstage" tour of the capitol dome and even got to see a bit of heraldry along the way. But it was the interaction of the three of us as we discussed heraldry, the American Heraldry Society, and everything, that gets me hoping that we can make such meetings a regular happening.
That six hours on the road was totally worth it! Now if I can just make the one in Dallas equally good for those who show up for it.
Posted by David B. Appleton at 8:52 AM