In a couple of the heraldry newsgroups I read regularly (and participate in occasionally), there have recently been questions about blazon, generally phrased this way:
"How would one blazon the line of division seen at [URL]?" 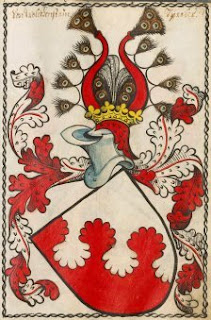 "The dexter third of a chief, appearing all by its lonesome, is a canton. What do you call the middle third when it's alone (like at the bottom of the page at [URL])?" 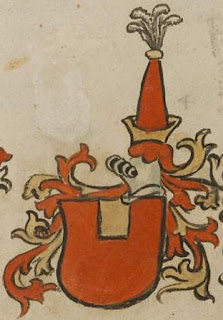 The presence of these two questions over a period of a couple of days, and some of the responses to them, started me thinking about whether the correct question was being asked. In these particular instances, the armory is German, and the armorials they come from are dated to the 15th and 16th centuries, but I have seen similar questions asked of arms from other countries and centuries. The bottom line here is that I think the wrong question is being asked. What is being asked is how would "one" blazon it, or what would "you" call it, with "one" and "you" being 21st century English-speaking, mostly American, heraldry enthusiasts.
Yet it seems to me that the right question to ask is "how did they blazon it?"
Admittedly, that is probably a more difficult question to answer. The armorials in these cases do not give blazons. It may be possible that by looking up the surname the arms might be found in J.-B. Rietstap’s Armorial Général, but even that would only tell you how he blazoned it in the late 19th century.
The answer to the real question involves asking a much smaller group of people and/or doing some serious book research. The smaller group of people would include those with some familiarity or expertise in the heraldry of the region from which the arms originate (admittedly, there is always the possibility that someone from this smaller group might read and be able to respond to the question, but that’s really a bit of a "hit or miss" proposition. You can’t always count on experts in a field of study seeing questions relating to that field in a more generalized newsgroup). The book research would involve looking through heraldic texts and dictionaries in the language of that region. In the two specific instances above, this would involve asking people familiar with German heraldry, specifically German heraldry of the Renaissance period, and consulting German heraldry texts and heraldic dictionaries. Not nearly as easy as posting a question to a modern, English-speaking newsgroup about how they would blazon such a coat, I realize, but one that would have a higher probability of answering the question that’s really being asked. That is to say, the right question.
Posted by David B. Appleton at 8:37 AM

Email ThisBlogThis!Share to TwitterShare to FacebookShare to Pinterest
Labels: blazon