So there I was, doing the same thing I do every work day at about quarter to six, going to pick up my wife from her work. (She works closer to home than I do, so I drop her off on my way in to work, and pick her up on my way home. It works out.) And there, for the first time ever since she’s been working there, by golly, there was heraldry in the driveway!

The building where she works is at UTSouthwestern Medical School, and they occasionally have meetings of one group or another there, most frequently of donors of one kind or another (though almost always "monied"). I usually notice that they’re having one of these get-togethers because of the valet parking people standing around by the front door. But Wednesday evening, it was really obvious – there were two signs, one at the driveway from the street and another by the parking garage next to the building, both labeled "Order of St John / Reception / Parking" and with a very prominent, very clear, very nice coat of arms on each of them. These are, of course, the arms of the Most Venerable Order of the Order of Saint John of Jerusalem Priory in the United States, though the full name would probably not have fit on the signs and still be readable. But with the coat of arms, how many words do you need? I mean, they probably could have left off "Order of St John" entirely and all of their members and everyone who had seen the coat of arms before would have known what organization it was. 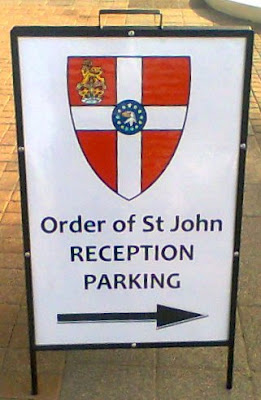 So, anyway, while Jo got into the car, I hopped out with my cell phone camera (thank goodness for modern technology!) and took a couple of pictures. Because it’s just not every day, at least here in Dallas, that you stumble across real heraldry as you go about your daily business. And when it does happen, it ought to be celebrated a little.

Or at least photographed and shared.
Posted by David B. Appleton at 12:35 PM