Deep in the Heart of Texas

It can sometimes feel a little weird, living in a state that used to be an independent nation, with a lot of the appurtenances and symbols of that independent nation hanging around and in use as the appurtenances and symbols of the state. The state flag, for example, used to be the flag of the short-lived but independent Republic of Texas (1836-1845, with the final transfer of power taking place on February 19, 1846). (One of the interesting provisions of the annexation resolution is that up to four additional states could be created from Texas' territory, with the consent of the State of Texas. This provision remains in effect, though I seriously doubt that it will ever be invoked, because if anyone were to try to divide Texas into two, three, four or five separate states, they would all end up fighting over who got to keep and use the name "Texas", as all of them would lay claim to it, to the exclusion of all the others. But I digress.) 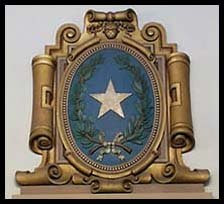 Another holdover from the Republic of Texas days is the coat of arms of the State of Texas, a blue shield featuring the "lone star" of Texas within a wreath of live oak and laurel branches. (The rendition above is from the Life Science Library at the University of Texas.) And you’re likely to run across the arms of the State of Texas periodically as you look around you here. For example, below is a version of the arms on the St. Paul Street side exterior of the Titche-Goettinger Building at 1900 Elm Street in downtown Dallas. (If you were interested, you could actually live in this building, which is decorated with a number of coats of arms and pseudo-heraldry about its exterior, it having been converted a few years ago into a combination of retail space and 129 loft-style apartments.) 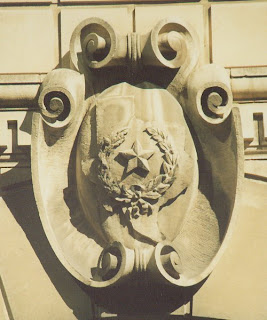 I like this particular rendition of the arms because it places them on an outline of the state in a cartouche with plenty of "scroll-y bits" (sometimes also referred to a "artistic frou-frou") surrounding it. (Yes, I know that it’s really Italianate and/or Rococo, but I like the Monty Pythonesque sound of "scroll-y bits" better.) It’s really one of the better three-dimensional displays of a coat of arms that I’ve found to date here in "the heart of Texas."
Posted by David B. Appleton at 8:29 AM