An Heraldic Library in a Pocket 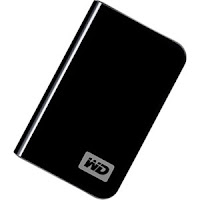 I had the opportunity recently to give a presentation about heraldry, something I get to do periodically and very much enjoy. I have some equipment that I take with me to these presentations; currently I have "downsized" to carrying my digital projector, a 9" netbook with accompanying power cord and mouse, and a WD Passport external hard drive with a 250 gigabyte capacity onto which I have loaded not only some of my presentations, but also a very healthy number of heraldry books and armorials that have been digitized. (Indeed, you can find links to many of these books down the left-hand column of this blog.)
Following the presentation, I had a lot of folks coming up to ask me specific questions, including one man who wanted to show me an ancestor’s coat of arms to see if I could tell him anything more than he already knew about it, not necessarily that day, but at some point in the future. He showed me a photograph of a grave marker erected about 1900 to the ancestor (who lived in the late 16th Century) that had the coat of arms on it.\
During the course of the afternoon, during a couple of meetings which did not require my full attention, I sat near the back of the room, pulled out my netbook, cranked it up, and hooked up my little Passport. In just a few minutes, with no connection to the internet whatsoever, I had pulled up a copy of Burke’s General Armory and looked up this man’s ancestor’s coat of arms there (it was not a common surname, and there were very few entries), which gave me not only a blazon but also the year of the grant to this ancestor. Closing Burke and going to Grantees of Arms to the End of the Seventeenth Century, I found an entry for this ancestor which listed several related manuscript documents in university libraries in England, including a copy of the grant of arms done by one of the heralds from the English College of Arms. Total time involved - about ten minutes after bootup. I wrote down all of the information that I found and gave it to him at the end of the meeting. He was thrilled, and so was I. 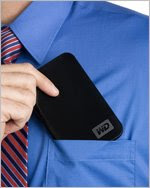 The amazing part of all this to me is the ability to squeeze several bookshelves worth of heraldry books into a hard drive (with plenty of room for more!) that will literally fit into a shirt pocket. Now, admittedly, my first interaction with computers was back in 19-(mumble, mumble), when the new computer at the university took up the entire third floor of the also new four-story computer building built to house it. And here I am, sitting in a meeting with a netbook and an external hard drive, all of which I can carry - with appurtenances, though not the digital projector - in what amounts to a small purse-sized bag (what I have nicknamed my "‘Puter Purse"), with who knows how many times the memory and computing capabilities of that old floor-sized mainframe. Indeed, in thinking about it, all the computer stuff, complete with electronic heraldic library, takes up less room than my book copy of Burke’s General Armory alone! And it certainly weighs a lot less, too.
Wow! As a friend of mine says occasionally, "I am gob-smacked".
Posted by David B. Appleton at 10:41 AM

Email ThisBlogThis!Share to TwitterShare to FacebookShare to Pinterest
Labels: technology