As I threatened promised you, today we' re going back a few years, to a trip we took to the Commonwealth of Massachusetts a long, long time ago (2008).
And I'm going to continue, at least a little bit, on the theme of my last two posts: the fact that heraldry is not a logo or trademark, and so can be depicted in more than one way.
Anyway, in our travels about the city of Boston, we ran across some heraldry (and some heraldry-like objects) depicted in an Art Deco style, that for some reason I find especially attractive. (I've never considered myself to be much of an Art Deco kind of guy; I tend to prefer the curves and swirls of Art Nouveau. But what can I tell you? I really like heraldry done in an Art Deco style.) 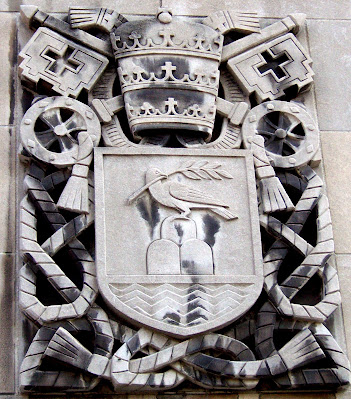 These are the arms of Pope Pius XII (Eugenio Maria Giuseppe Giovanni Pacelli), who was Pope from 1929 to 1958. His arms are blazoned: Azure a dove close reguardant argent holding in its beak an olive branch proper, atop a trimount argent issuant from a terrace vert, a base barry engrailed argent and azure.
Here the arms are surmounted by the crossed keys and triple tiara of the Papacy, with four tassels filling the role normally taken by cloth mantling.
There were some other decorative plaques on the building as well: 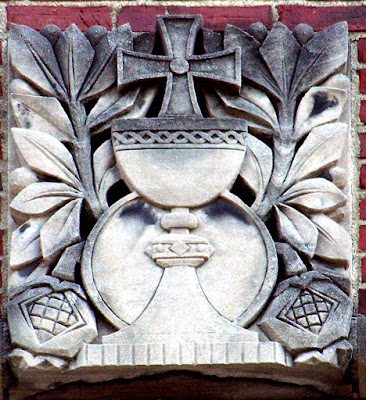 A cross paty issuant from a chalice, presumably representative of the Eucharist, framed by laurel branches. 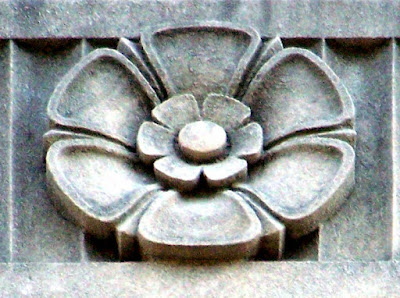 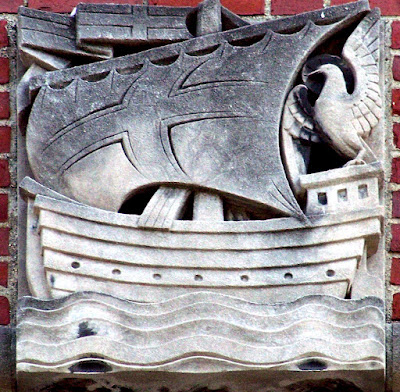 A lymphad (ship) sailing on waves of the sea, it's pennon and mainsail charged with a cross, and atop the stern, a dove rising wings displayed. 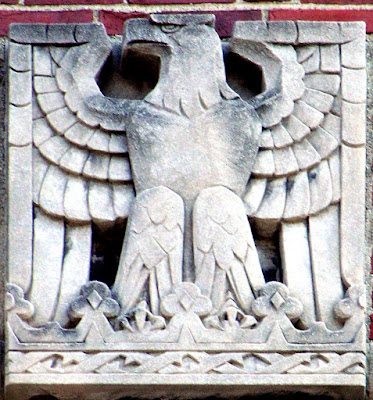 And finally, and slightly more heraldic than the others, an eagle displayed issuant from a ducal, or crest, coronet.
All of these done in a classically Art Deco style.
Are you as attracted to these depictions as I am?
Posted by David B. Appleton at 2:00 AM