Aw! You guessed.
But that's right! In the Commonwealth of Massachusetts!

We saw quite a number of versions of the Massachusetts arms as we traveled about the eastern end of the state.
A good blazon of the arms would be: Azure, a Native American statant holding in his dexter hand a bow and in his sinister hand an arrow or in dexter chief a mullet [of five points] argent.

A legal, less heraldic description of the arms can be found on the website of the American Heraldry Society: A shield having a blue field or surface with an Indian thereon, dressed in a shirt and moccasins, holding in his right hand a bow, and in his left hand an arrow, point downward, all of gold; and, in the upper corner of the field, above his right arm, a silver star with five points.
Here's what it looks like in color, from the state flag flying in front of the Police Headquarters in Milford: 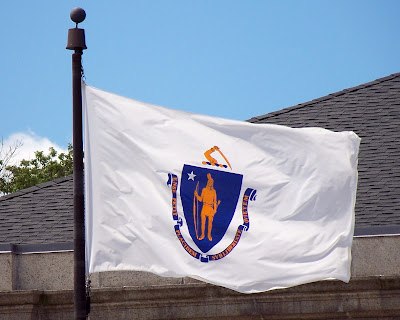 The crest is: An arm embowed vested and grasping a broadsword or.

And the motto: Ense petit placidam sub libertate quietem (By the sword we seek peace, but peace only under liberty.).
The arms, crest, and motto were adopted by Governor John Hancock and his Council on December 13, 1780.
Anyway, with all that a background, here are some of the other depictions of the arms we saw while we were there. Here's one from the façade of the Boston Library: 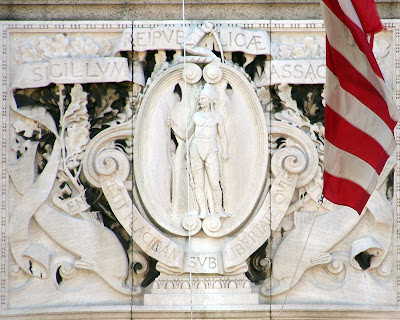 And a couple from the grounds of Harvard University in Cambridge. One becoming worn from the weather ... 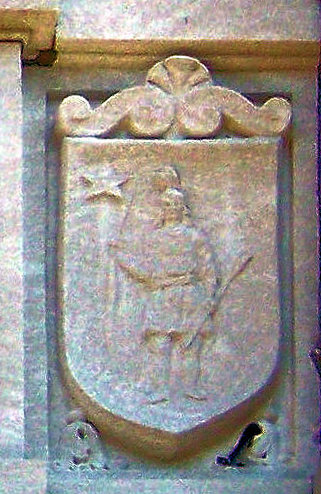 And the other, more protected, in wonderful condition: 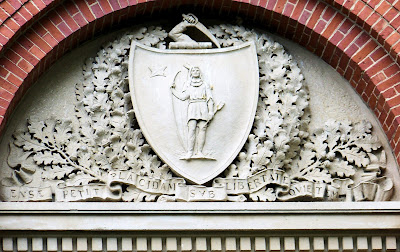 Not necessarily the best heraldry, or the most culturally sensitive, but you have to remember that it was designed by committee, in 1780, in the middle of a war (1775-1783). So there's that.
In any event, it's what they use, and as a non-resident, I'm not really in a position to tell them to change it. (Now if they asked me about it, yeah, I could give them some suggestions!)
Posted by David B. Appleton at 2:00 AM