Just above the lions we saw in the last post with their blank cartouches, we come to some Royal heraldry. 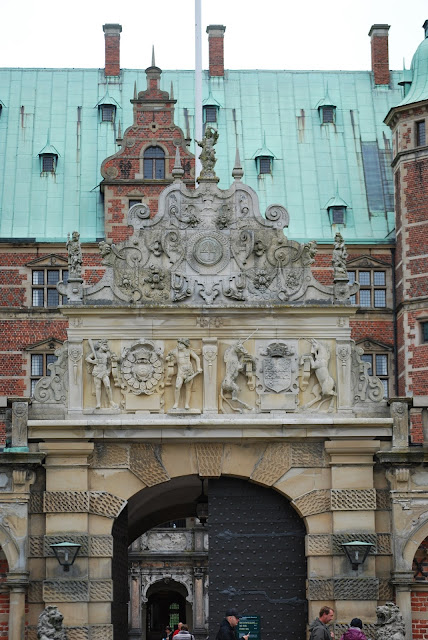 I mean, if you're going to make sure that people know who lives there, this is the way to do it, right?
At the top panel of these carvings over the archway of the door we have the cipher of King Christian IV. 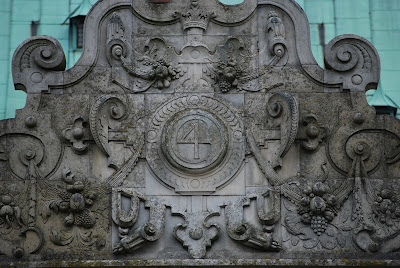 Below that, we find two achievement of arms.
The first is that of Christian IV, the arms of Denmark surrounded by smaller shields of the territories claimed by Denmark at the time, clockwise from upper right: Norway, Kalmar Union/Sweden, King of the Goths (Jutland), King of the Wends (Funen, sometimes Bornholm), Gotland, Iceland, Schleswig, Holstein, Stormarn, Ditmarsken, Oldenburg, Delmenhorst, and one I have not yet been able to identify. (It appears to show some kind of a bird rousant. On a painted panel of all of these arms inside the Castle, which we will see shortly, this shield is shown as Azure an eagle displayed argent. Even that still didn’t help to identify which territory it represents).
Once again, I recommend clicking on the image to see a larger, more detailed version of the photograph. 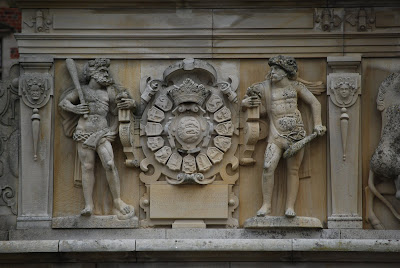 Next to the King's arms, we have the arms of his queen, Anne Catherine of Brandenburg.

This shield, supported by two unicorns, is Quarterly of fifteen, with most quarters being the arms one or another territory belonging to the Margraviate of Brandenburg. The second quarter is the Margraviate of Brandenburg; the eleventh is Hohenzollern (Quarterly argent and sable). Lacking the colors here, it is difficult to be certain of the identity of some of the quarters; e.g., which (of the three) eagles is that one for? Which of the six griffins are attributed to what territory? There is remarkably little explanation of these quarters on-line or in the heraldry books in my library.
That said, the "blank" fourteenth quarter is actually Gules plain, the Blut Fahne or Regalian quarter, indicative of Royal prerogatives. (And as we will see later, it is sometimes diapered.)
Again, click on the image below to see a larger version with greater detail. 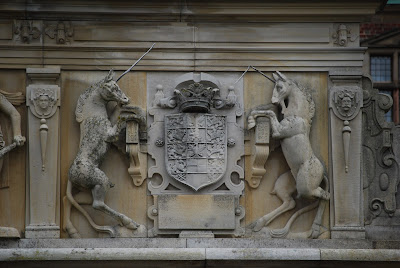 All in all, an amazing display of Royal heraldry, proof positive that: (1) you can make sure that people know just exactly whose house this is; and (2) underlining the truth of the line in Mel Brooks' movie History of the World, Part One, "It's good to be the king."
Next time, more heraldry, and we don't even get inside the Castle yet!
Posted by David B. Appleton at 2:00 AM