And Another Heraldic Logo


Speaking of using heraldry as a logo (see our last post for another example), on my wanderings about the city of Copehhagen, I ran across this sign, advertising the Digital Notebook of the Future (in Danish, Fremtidens Digitale Notesbog). 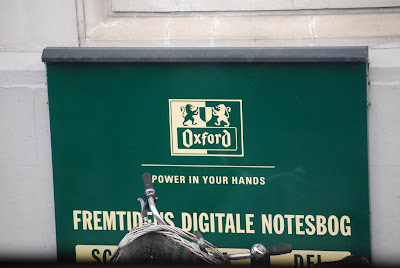 At the top, of course, is the logo of Oxford, a brand of the French-based Hamelin Group, "The brand that's shaping the future of books & pads", according to the Hamelin website.
The brand goes back to just more than a century, when in 1916 Papeteries Laroche-Joubert introduced their highest quality paper and began using the Oxford name. At that time they used two combattant lions for their logo. In 1982, Hamelin acquired the brand, and added the word "Oxford" beneath the lions.
More recently, and as you can see on the sign above, the lions now maintain a shield divided per pale between them.
Though the sign makes everything a cream color and green, Oxford's and Hamelin's websites make the colors white and blue (or heraldically, argent and azure).
So, yeah, it's basically a logo, but one with an heraldic flavor to it, and as it usually does, the shield shape caught my attention, and I had to photograph it and share it with you.
Posted by David B. Appleton at 2:00 AM