In this, the final post of my heraldic excursions in and about Antwerp, Belgium, we come to two very nice displays of heraldry.

Participants in the Congress were invited to a reception at the City Archives one evening, and while there we were treated to a number of heraldry-related items from those Archives.

It didn't hurt that two of those items consisted of some of the more complex, and colorful, uses of heraldry: heraldic family trees, here, specifically, descent trees.

I apologize for the quality of the pictures. I only had my phone with me to take photographs, and, naturally, the scrolls on which these trees were painted were behind glass, so there are lots of reflections.

First, we have the descent tree of the Doncker* family: 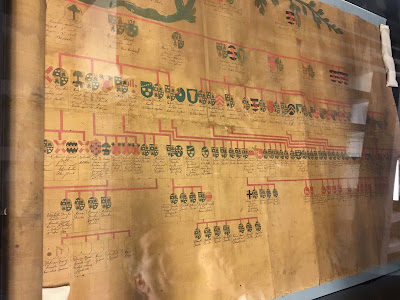 (I recommend clicking on the image above, or those below, to see a larger, more detailed version, so you can get all of the detail contained in these pictures.)
At the top left of the scroll we find this display of marital arms, those of Gisbertas Doncker and Maria Ryns: 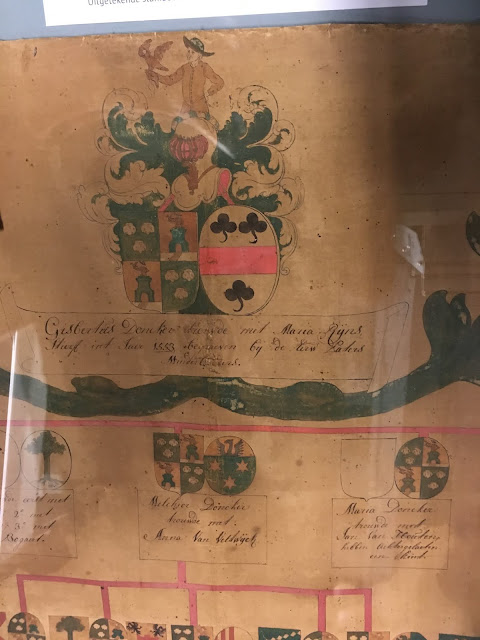 The other descent tree, this one taller than it is wide, was that of the de Hobocken** family, starting with Nicolas de Hobocken at the top: 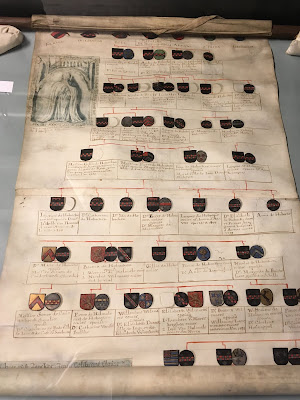 What follows are two closer shots of the tree: 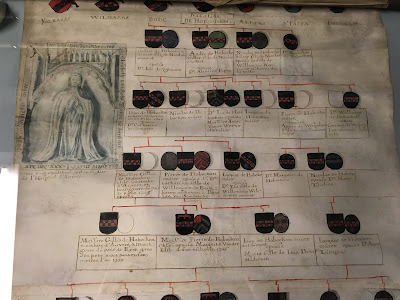 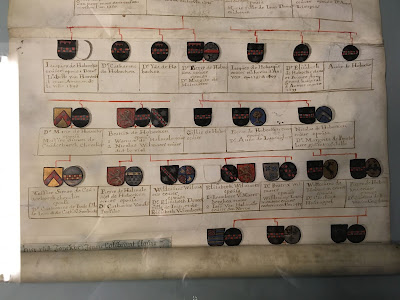 There is a wonderful amount of detail in this descent tree: names, names of spouses and second spouses, and dates (1306 through 1433 in the visible portion of the scroll).
All in all, it was a fun evening with good friends and, of course, an abundance of heraldry to see!

* I have not been able to confirm elsewhere that these are the Doncker arms. The Donckers in Rietstap's Armorial Général bear different arms from these. This coat appears to be the quarterly arms ascribed to the van Pruyssen family in the Wapenboek van de Belgische Adel.
** What is now Hoboken, New Jersey in the United States, was originally called Hoebuck, old Dutch for high bluff and likely referring to Castle Point (the district of the city highest above sea level). Hoebuck was used during the colonial era, and later spelled as Hobuck, Hobock, Hobuk and Hoboocken. In the nineteenth century, the name was changed to Hoboken, influenced by Flemish Dutch immigrants and a folk etymology that had emerged linking the town of Hoboken to the similarly-named Hoboken district of Antwerp.
Posted by David B. Appleton at 2:00 AM