Civic Heraldry on the Jacob van Artevelde Monument in Ghent

Below the statue of Jacob van Artevelde in Vrijdagmarkt ("Friday Market") Square in the old city of Gent/Ghent, it is just chock-a-block full of coats of arms.
Most notable among these, however, each held by a woman, are the arms of Flanders, Bruges, Ypres, and Ghent.
Here, from one side of the monument, are Flanders (left), Or a lion rampant sable, and Bruges (right), Barry argent and gules a lion rampant azure. 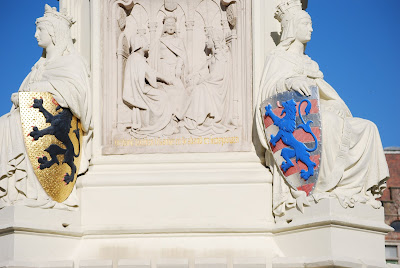 On the other side of the monument, we find Ypres (left), Gules a cross vair on a chief argent a patriarchal cross gules, and Ghent (right), Sable a lion rampant argent crowned or. 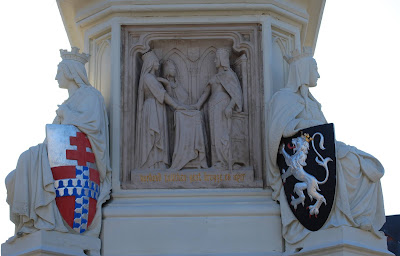 Between these last two is a panel of the three women representing Bruges, Ypres, and Ghent with the 1338 treaty forming a federation of the three cities. You can see the arms of Ypres above center, with the arms of Bruges on the left and Ghent on the right behind the ladies' heads.. 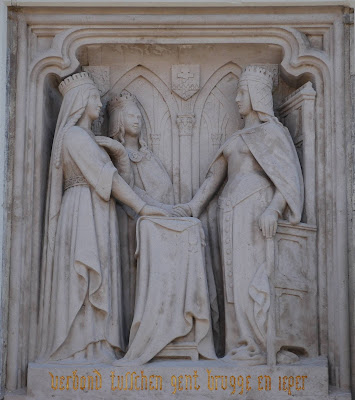 What a great display of heraldry!
Posted by David B. Appleton at 2:00 AM