Arms on the House of the Archers


Along one side of the main square in old Antwerp is a row of several ornately decorated guild houses.

One of these is the Huis van de Schutters, the home of the Sint-Joris Guild of Archers. This is a different guild from two whose arms we have already seen: the Old Longbowmen and Young Longbowmen Guilds. These Archers, or Shooters, used arbalests, or crossbows. 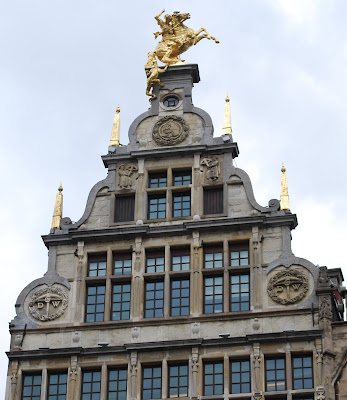 The "House of the Shooters", topped by a gilded statue of their namesake St. George slaying the dragon (which itself appears to be climbing up the facade of the building), has two roundels with a crossbow on each side of one level, while at the top of the next level there are relief carvings of two crossbowmen. (You can click on the image above to go to a larger picture where you can see these details more clearly.)
On the top level, below the statue of St. George, is an unusual coat of arms. 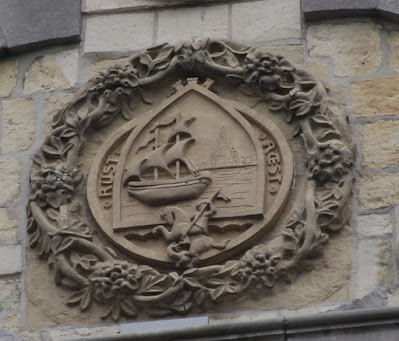 In an upside down shield surmounted by three towers (rather like a mural coronet), above an image of St. George and the dragon, flanked by the words Rust Rœst, is a landscape of a ship on the River Scheldt with the skyline of the City of Antwerp behind it. (Rather like this recent photograph, only without the sailing ship in the foreground. Again, click in the image above to see the skyline on the shield in more detail to better compare it to the modern skyline in the photo below. It appears not to have changed all that much in the last few centuries.) 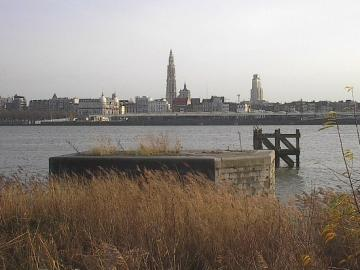 I found it to be an interesting display of heraldry, on a building clearly meant to demonstrate the pride and prowess of the guild members.
Posted by David B. Appleton at 2:00 AM