A Day-Long, Long-Day Excursion to Ghent

So, having (finally!) finished our heraldic tour of Antwerp, the Congress we were attending there had, for those who so desired, a day-long excursion to the nearby city of Gent/Ghent.

Yes, the same city in the title of the Robert Browning poem, "How they brought the good news from Ghent to Aix." Never mind that in the poem, you never find out what the good news is; it's really much more about the horse Roland. But, yes, that Ghent.

Anyway, we got off the bus near the large Vrijdagmarkt square, where about the first thing we noticed was the large monument and statue of Jacob van Artevelde. 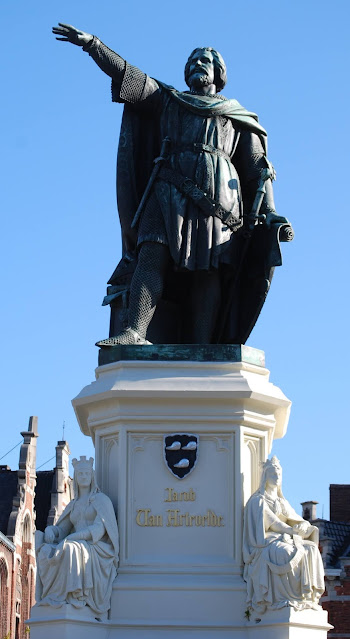 (Every time I see a statue like this, with one hand pointing somewhere, I cannot but think that he is saying: "You left your car over there!")

Anyway, in case you haven't heard of him before, here's a bit of history of the man:

Jacob van Artevelde, also known as The Wise Man and the Brewer of Ghent, was a Flemish statesman and political leader. He was born in Ghent to a wealthy commercial family. He married twice and amassed a fortune in the weaving industry. He rose to prominence during the early stages of the Hundred Years' War. Fearful that hostilities between France and England would hurt the prosperity of Ghent, he entered political life in 1337. He set up an alliance with Bruges and Ypres (later the Four Members) in order to show neutrality. Van Artevelde gained control of the insurrection against Louis I, the Count of Flanders who had abandoned his father's anti-French policies. Louis I was forced to flee to France, while van Artevelde served as captain general of Ghent from that time until his death.

The Count of Flanders tried to overthrow van Artevelde’s power by force of arms but failed completely and was compelled at Bruges to sign a treaty (June 21, 1338) sanctioning the federation of Ghent, Bruges, and Ypres (hence the arms of those three cities, with Flanders, on the monument). Flemish relations with England had traditionally been good, due to wool and textile trade. Neutrality was eventually broken, and the towns took the side of the English in 1340. In that year, van Artevelde persuaded the federation to recognize King Edward III of England as sovereign of France and overlord of Flanders. Flemish trade and industry flourished under van Artevelde's semi-dictatorial rule. In 1345, however, rumors that he planned to recognize the son of Edward III, the Black Prince, as count of Flanders, suspicion of embezzlement, and the excommunication by the Pope caused a popular uprising in Ghent and van Artevelde was killed by an angry mob. 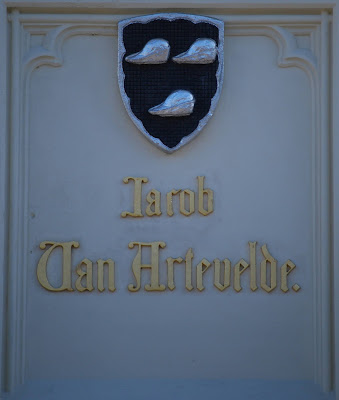 On the front of the monument is plaque with his name in raised letters and a coat of arms, presumably his: Sable three hats or caps within a bordure engrailed argent. (Riestap's Armorial Général blazons them as couronnes de feuillage, or "crowns of foliage". But these are definitely hats.)
UPDATE: This particular type of hat or cap is called bycocket or bycoket, is a style of hat that was fashionable for both men and women in Western Europe from the 13th to the 16th century. It has a wide brim that is turned up in the back and pointed in the front like a bird's beak. In French, it is called a chapeau à bec due to this resemblance.
Anyway, here's a couple more views of the statue from different angles for your viewing pleasure. (On the whole, I am impressed by the sculptor's creating of the chain mail on the statue.) 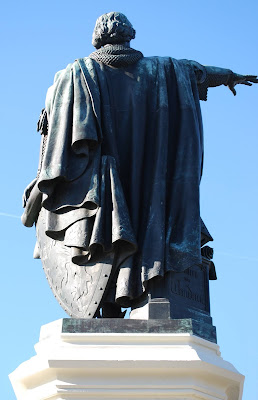 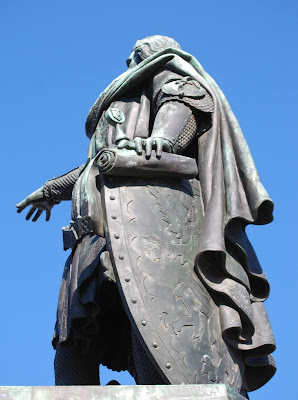 As you may note, the shield on which he rests his hand is not the van Artevelde arms. Here's a closer view: 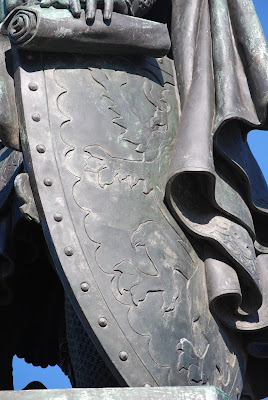 As you can see, it is quite clearly a lion rampant. I suspect, without being certain (shields with a single rampant lion are a virtual plague in this part of the world; without tinctures, it is very difficult to be sure what entity a shield with a single lion on it represents), that it is supposed to be the arms of the city of Ghent: Sable a lion rampant argent crowned or. (We will be seeing a lot more of the city's coat of arms, trust me!) It also appears to have a bordure engrailed added to it; I don't know why.
Next time, we'll start looking at all of the other heraldry on this monument.
Posted by David B. Appleton at 2:00 AM