Inside and Outside the Cathedral in Antwerp, Part 2 of 3


The other coat of arms which I ran across both inside and outside of the Cathedral of Our Lady in Antwerp, Belgium, was that - with some differences - of the Violieren.

The Violieren (wallflower or gillyflower) was a chamber of rhetoric that dates back to the 15th century in Antwerp, when it was a social drama society with close links to the Guild of Saint Luke. It was one of three drama guilds in the city, the other two being the Goudbloem and the Olyftack. In 1660 the Violieren merged with former rival Olyftack, and in 1762 the society was dissolved altogether.

The several depictions of the arms of the Violieren demonstrate their close link to the Guild of St. Luke, a city guild for painters and artists, through the use of the winged ox of St. Luke.
First we have this black and white (no, really. The photograph is in color, but the image was drawn and painted in black and white) which was on display at the City Archives. 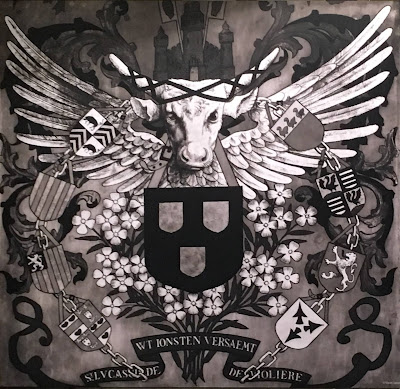 Here we have the arms of the society surrounded by gillyflowers (violieren), supported by the winged ox of St. Luke, the whole encircled with eight personal coats of arms connected by a chain, with the arms of the City of Antwerp behind the ox's head.
I found this piece to be one of the most dramatic works of heraldic art that I have ever seen. It is a remarkably dynamic image.
Inside the Cathedral, we can find the arms of the Violieren in the upper part of one of the stained glass windows.

Here, the arms are colored Azure three escutcheons argent and the shield hangs from the neck of the winged ox of St. Luke (affronty). The ox's head has a golden star between its horns.
In another of the stained glass windows, we can find a variant of the arms of this society: 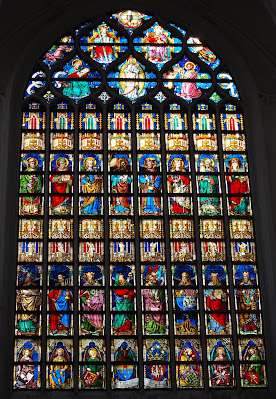 You may have to hunt for it, as it's a fairly large window with a lot going on in it.
Here's a clue: It's right next to the arms of the City of Antwerp.
Not sure yet? Here's a close-up of the bottom part of the window: 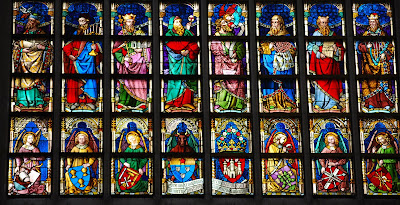 See it now? Just left of center in the bottom row?
Here, the shield is Azure three escutcheons argent on a chief or a mullet gules. It is supported once again by a single supporter, the winged ox of St. Luke, brown with gold horns and green wings. (You can click on the image above to see a larger and more detailed version where these details are easier to see.)
Immediately to its right, on a shield surmounted by a crown, is the coat of arms of the City of Antwerp, which we have already seen many times in our heraldic review of the city.
To the left and right of these two central shields are six more, three on each side, of some of the guilds of the city.
Next time, yet another guild!
Posted by David B. Appleton at 2:00 AM