The Heraldic Results (for You) of a Project (of Mine)


Every once in a while in my Copious Free Time® I continue to work on an organizational project that I started last year.

I mean, I've been traveling, and taking photographs of heraldry, for quite some time now. As a consequence, I have accumulated a lot of pictures of coats of arms, and crests, and even blank shields from my travels. So as I can get the time, I've been going through a lot of those photos and trying to organize them into an "armorial" of my own on my computer, wherein I will label the pictures with the name of the owner (whether just a surname, the name of a specific individual, or corporation or civic body) as well as the place (usually the city) where it was found. (This last is particularly helpful when, for example, I ran across the arms of the Swiss city of Berne on a billboard for an RV company in Las Vegas, Nevada. No, really!)

Anyway, as I have been working my way through years of these pictures, I am running across coats of arms that, for one reason or another,* I have not already shared with you on this blog.** So, before I get into posting all of the photographs of heraldry that I took during last year's big trip to Belgium and Denmark, I thought I would share some of these previously unshared and newly-labeled pictures from earlier trips; specifically, two trips we took to Germany - one to Stuttgart and the other to Heidelberg. (Stuttgart was to attend a conference; Heidelberg was to visit the birthplace of my great-grandfather. Both were a lot of fun, and also resulted in a lot of pictures of heraldry.)

On the trip to Stuttgart, the appearance of heraldry occurred as we boarded the aircraft! 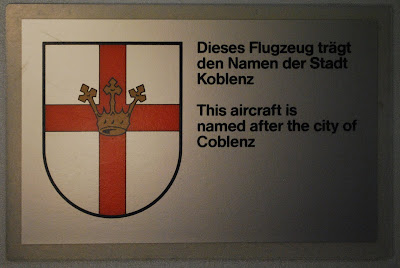 (Why yes, we were flying Lufthansa. How could you tell?)

The arms of Koblenz have been used by the city since the 13th Century, and are blazoned as: Argent a cross gules overall a crown Crown of Mary or. (St. Mary is the patron saint of the city.) Some renditions of the arms show the crown as a more common ducal or crest coronet.

Anyway, it was a great way to start a trip, with heraldry before even leaving the ground.


* Some might say "laziness". Maybe it rained that day. Or I wasn't feeling well. "Honest... I ran out of gas. I had a flat tire. I didn't have enough money for cab fare. My tux didn't come back from the cleaners. An old friend came in from out of town. Someone stole my car. There was an earthquake. A terrible flood. Locusts. It wasn't my fault!" (The portion in quotation marks is said by John Belushi's character in the movie The Blues Brothers. It's too good a quote not to use here.)

** It is possible that I actually have shared one or more of these pictures with you before, but I'm not going to go through all 1, 286 posts (so far!) to double-check. If you have seen one or more of these coats of arms on this blog before, you're tough, you can take it.