Heraldry in the Park


Right across the street from the hotel where we lodged in Stuttgart, Germany, was a lovely little park with a pond and surrounding grassy area. 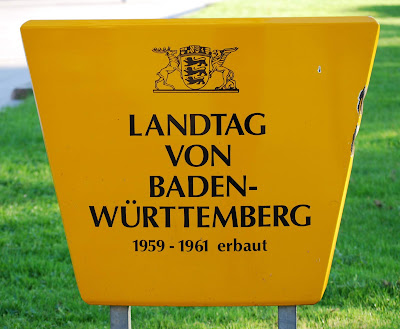 The German on this sign translates to: State Parliament of Baden-Württemberg, built 1959-1961.

But of course it was the heraldry on the sign that really caught my eye. 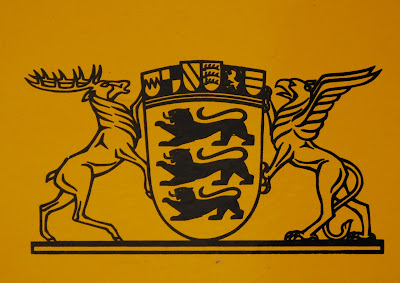 The arms, officially granted on August 2, 1954, are Or three lions passant in pale sable, the three lions of the Dukes of Schwaben from the house of Staufen.

On top of the shield is placed a popular crown, on which the arms of former territories that now form the State of Baden-Württemberg are shown. From left to right (dexter to sinister) these are: Ost-Franken (Franconia), Hohenzollern, Baden, Württemberg, Kurpfalz, and Austria. As supporters a deer and a griffin, taken from the arms of Württemberg and Baden respectively are used.

We will see the arms of Baden-Württemberg and Württemberg (Or three stag's attires in pale sable) again in other places around Stuttgart, and Baden (Or a bend gules) in both Stuttgart and Heidelberg. Be watching for them!