There are a number of heraldic artifacts to be seen within the confines of The Institute of Heraldic and Genealogical Studies, not the least of which is this very nice, and old, hatchment. 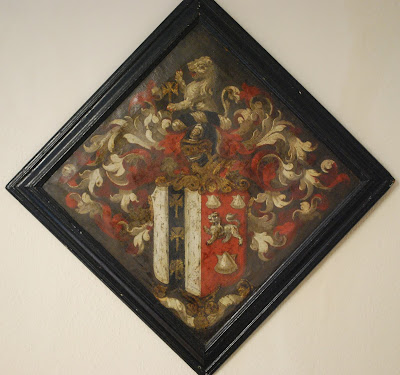 For those of you who don't know what a hatchment is, it is a funerary board in the shape of a diamond, upon which is painted a coat of arms. As a general rule, the hatchment was hung on the home for a year following the death and then donated to the local parish church where it was hung inside for a memorial.

There is a whole set of rules about shield shapes and when/where the background is painted in black or white (see, e.g., http://www.internationalheraldry.com/hatchments.htm), all of which are to help you identify who died, the gender of the deceased, any spouse(s), and whether the spouse(s) survives; suffice it to say that the hatchment above is that of a man who has died and whose wife had predeceased him, hence the shield shape and all black background.

Looking up the arms in Papworth's Ordinary and the crest in Fairbairn's Crests, we find the following (I have underlined where the blazons given there differ from the painting here):

Criche, of Stubbing-Edge. – It appears by the deeds that this family was settled in Derbyshire as early as the reign of Edward II., and they were probably originally of Criche. The Criches had been settled for several generations in the parish of Ashover. William Criche, father of Ralph, who was living in 1634, married the heiress of Sandford; his second wife was one of the Hunlokes, of Wingerworth. Cornelius Criche, the last of the family, died in very reduced circumstances, at the age of 101, in 1789.
Arms: ‒ Ermine, on a pale Sable, three crosses patteé fitchée, Or.

All in all, a lovely bit of heraldic art on which to end our armorial tour of Canterbury.