Continuing our circumlocution of the Cloister at Canterbury Cathedral, we come to this memorial set into the floor: 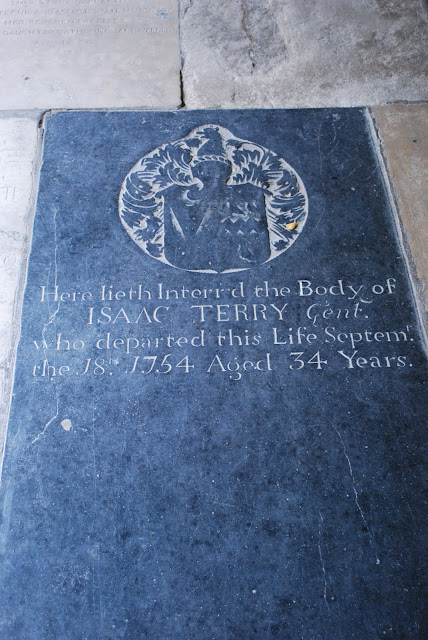 Though worn, the marshaled coat of arms is still mostly legible: Arms: Ermine on a pile gules a leopard’s head jessant-de-lis or, a crescent for difference (Terry), impaling, A fess dancetty between three birds. Crest: A dragon’s head erased vert.

If I had to guess, I believe that Thomas is the most likely candidate for Isaac Terry's wife's arms here.

The Kent Archaeological Society (https://www.kentarchaeology.org.uk/19/136.htm) informs us that Isaac Terry (born about 1720) was the son of Abraham and Mary Terry and was born at Faversham.

This Isaac Terry is not the Isaac Terry who gave the sermon “The religious and loyal subject's duty considered : with regard to the present Government and the Revolution” in the Cathedral Church of Canterbury, on Wednesday, January 30, 1722-3.