The (Very Worn) Heraldry of a Husband and Wife


Continuing around the Cloister at Canterbury Cathedral, we come to this worn stone: 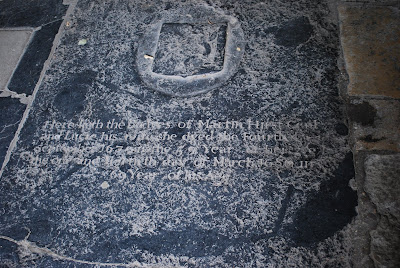 
Here lieth the Bodies of Martin HIRST, Gent.
and Lucie his wife. She dyed the Fourth day of
September 1679 in the 59 Year of her Age, he
the one and thirtieth day of March 1680 in
69 Year of his Age.

Parts of this inscription are very hard to make out; I have compared my transcription to that from a rubbing taken in the 1920s, which helped to fill in some of the most difficult words to read.

The heraldry carved into this memorial stone is, if anything, even harder to make out than the inscription: 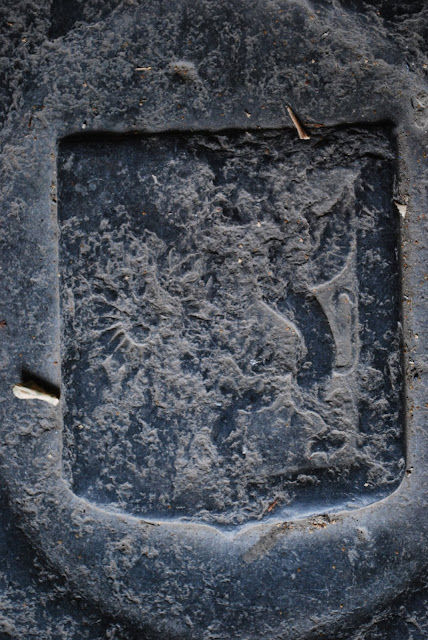 Fortunately, we have a blazon: Argent a sun gules (Hirst), impaling Or a griffin segreant sable a bordure gules (Boys).

As you look at the carving and compare it with the blazon, you can begin to see the sun, the bordure around the sinister (to the right as you look at it) half of the shield, and then the tail, wing, and body of the griffin, and it becomes more readable.

The Hirst arms of Argent a sun gules are also to be found in the Gore roll of arms created in Boston, Massachusetts, in the early to mid-18th Century, as number 43: "John Hurst, Esqr. of Salem / in ye County of Esix [Essex, Massachusetts], Marchant [Merchant] / 1717".

There are several branches of the Boys family in Kent using variants of the griffin and bordure. Another branch bore: Or a griffin segreant per fess azure and sable within a bordure gules, and yet another branch of the family bore this coat (with the griffin per fess) charging the bordure with crosses formy alternating with acorns or.