Memorial to a Wife in the Cloister at Canterbury Cathedral


Continuing our march around the aisle of the Great Cloister of Canterbury Cathedral, I came across this armorial gem: 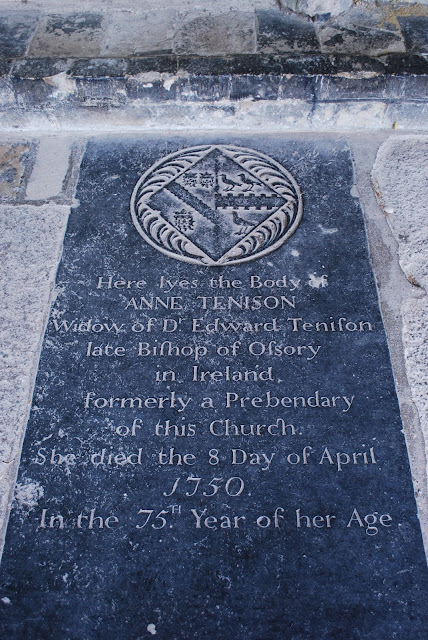 Here lyes the Body of
ANNE TENISON
Widow of Dr. Edward Tenison
late Bishop of Ossory
in Ireland,
formerly a Prebendary
of this Church.
She died the 8 Day of April
1750
In the 75th Year of her Age.

Looking at his entry on Wikipedia (https://en.wikipedia.org/wiki/Edward_Tenison, where you can also find a portrait of him by John Vanderbank), we find that he died in 1735 and is buried in St. Mary's Church in Dublin, Ireland.

But of course it was the heraldry which caught my attention: 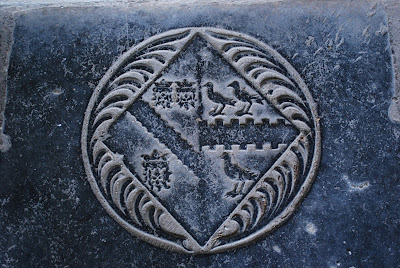 Her family arms are not given in An Alphabetical Catalogue of Coats of Arms in Canterbury Cathedral. Wikipedia says that Dr. Tenison's wife was "Ann Searle or Sayer", but neither Burke's General Armory nor the Dictionary of British Arms show the arms carved here for any Searle or Sayer under these or any variant spellings I could find.

Papworth's Ordinary of British Armorials only cites one coat of arms in this pattern: Callecote: Argent a fess embattled counter-embattled gules between three Cornish choughs sable beaked and legged azure.

So Mrs. Tenison's arms are a mystery; I have no idea exactly what they are or where they came from.

Still, it's a nice memorial to her (and her husband's) memory, and a carefully, if not entirely accurately, carved marital coat of arms.