Armorial Memorial to a Father, Mother, and Son


Whew! After walking all around the Great Cloister at Canterbury Cathedral with my head in the air looking at all the shields on the ceiling (documented in my previous post), it was time to look at the other heraldry in the Cloister, which I will be sharing in the next several posts before getting to the interior of the Cathedral.

As an American, and as many European and British churches I have visited, it still feels "weird" to be walking down an aisle inside a church or cloister, and be treading on memorials to the dead, whether heraldic or not. And though there were a number of armorial memorials in the wall of the Cloister, there were a lot of memorials, heraldic and not, set into the floor.

One such one was this one in the South Aisle of the Great Cloister, to Robert and Rebecca (Laminge) Sprakeling or Sprakeley, and their son Adam. 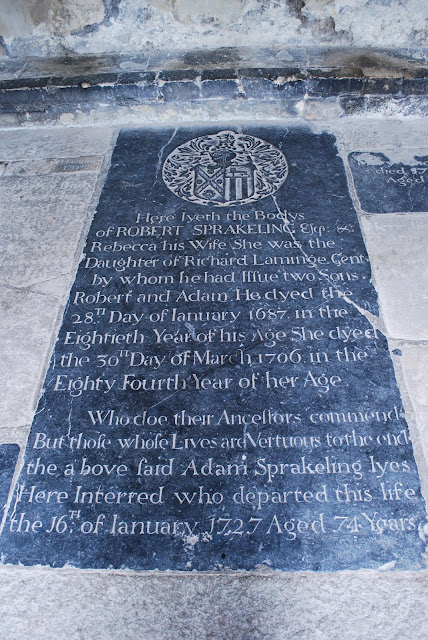 
Here lyeth the Bodys
of ROBERT SPRAKELING Esq &
Rebecca his Wife. She was the
Daughter of Richard Laminge, Gent.
by whom he had Issue two Sons
Robert and Adam. He dyed the
28th Day of Ianuary 1687 in the
Eightieth Year of his Age. She dyed
the 30th Day of March 1706 in the
Eight Fourth Year of her Age. 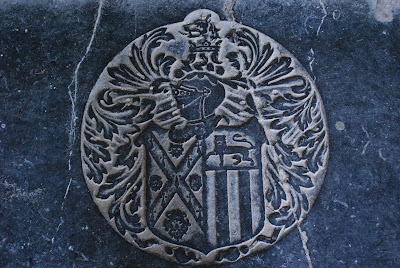 An Alphabetical Catalogue of Coats of Arms in Canterbury Cathedral by Cecil Humphery-Smith, which I bought because why should I do all the research from scratch when someone else, especially someone as knowledgeable as Mr. Humphrey-Smith, has already done a lot of the legwork, tells us:

Sprakeley, Robert and wife Rebecca Laminge, and their son Adam Sprakeley. Sable a saltire ermine between four leopard’s faces or (Sprakeley), impaling _____ two pallets _____ and on a chief _____ a lion passant guardant _____ (Laminge).

I have had no luck finding the Laminge arms, even looking under variant spellings (as one often has to do). The closest I could find in Papworth's Dictionary of British Armorials was Widnam (Sussex): Argent two pallets gules on a chief azure a lion passant argent crowned or. (Here there is no crown, and the lion is passant guardant.

The "New Papworth," the Dictionary of British Arms, only came marginally closer with: Hen[ry] de Gloucestria, two pallets and on a chief a lion passant.

The arms, helm, crest, torse, and mantling are beautifully carved; I tried to tread lightly around it.