The Heraldry of an Eatery


There is no shortage of places to eat in downtown Arras, France.

This could be a good thing, or it could be not so good. Personally, when we travel I have a tendency to want to apologize to all of the locals whenever we see a McDonald's (as we ran across in Canterbury, England,* following our week in France), a Burger King (though apparently the Burger King in Helsinki, Finland, has a sauna in it, because of course it does), or, in Arras, a Subway. I want to apologize because I feel that American "culture" seems to be taking over the world, and I just don't think that it's always a Good Thing® when that happens.

Fortunately, there were a lot of other restaurants around the Place des Héros and the Grand' Place, and we tried to make it a point to eat at as many of them as we could during our stay in Arras.

There was one pub and brasserie that we returned to several times, because the food and the drinks were so good there. And it didn't hurt that their logo was heraldic: 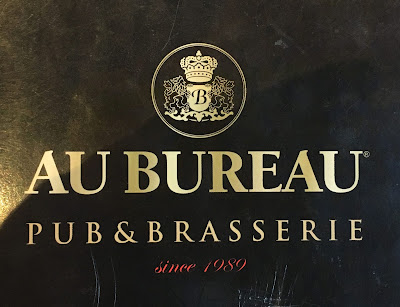 The shield with the capital B, supported by two lions rampant regardant all surmounted by an imperial crown, was found on just about everything in the place, from the menu to the napkins to some of the glasswork: 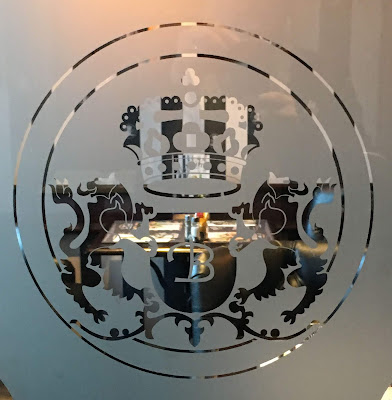 Good food, a nice atmosphere, and an heraldic logo. What more could an heraldist ask for?

* Canterbury has other issues, too. There were at least three different shops there that proudly proclaimed that they sold "American candies." I was sorely tempted to go in and ask them, "Why would you sell American candy here? Compared to most European sweets, American candy is shite!" But I didn't; I manfully resisted that urge. I'm sure that it makes economic sense to them, since they advertise it so prominently. I just don't understand why. I can have American candy anytime, and I was more than happy to be able to bring back a couple of boxes of candies bought in France and to ration them carefully until they were gone. American candy pales in comparison to what I've been able to buy in Europe.