A Few (So Far) Unidentified Arms in Arras


Some of you who follow me on Facebook know that lately I've been having issues with my computer; it will sometimes make a loud whirring noise for from 8 to 13 seconds, and it will occasionally just freeze up on me, accepting no input from either the mouse or the keyboard.

So after having the local Geek Squad run some diagnostics on it that didn't find anything wrong, and then having them tell me that they do some more work on it (for a couple of hundred dollars more!), I decided to just bite the bullet and replace my current seven year old computer with a new one that has, among other things, a much larger hard drive and four times as much RAM.

But I know that once it gets here (in about a week from today), I know that it's going to take up all of my time for two or three days just getting it set up, started up, connected to the wifi, updated, installing a bunch of the software I use all the time, uninstalling several of the programs that come preinstalled on it that I don't want, and then making sure that everything is working the way I need it to and fixing it if it doesn't.

What this means for you and me right now, though, is that in dealing with the issues with the current computer, shopping for a new one, and getting everything else done that I need to in preparation for the new one's arrival and installation (e.g., getting all of my files backed up to an external hard drive to transfer to the new PC), I don't have the time to finish researching all of the other photographs I have of heraldry that I took while we were in Arras, France last fall.

And yet, I want to share them with you. So over the next few posts, I'm going to show you the other coats of arms and heraldry I saw, whether or not I've been able to identify it. I hope that you will find them of some interest. And, of course, if you should know to whom they belong, please feel free to share that identification in the comments, so that we can all learn something more about them.

Thank you for your patience and understanding. Enjoy!

A pair of arms. Gules a bend between three roundels(?), and Three martlets. 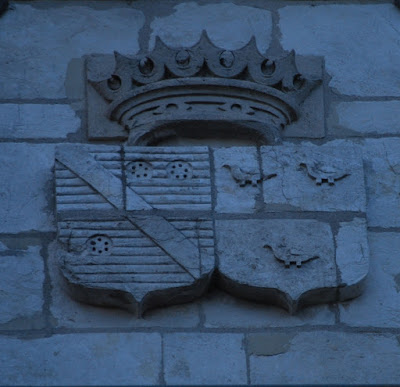 This next one reminds me of the arms of Edinburgh, Scotland, but the shield here is hatched for gules, while Edinburgh's shield is argent. 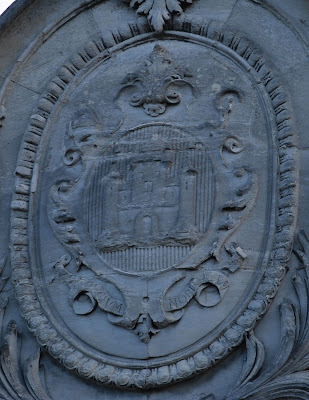 I had thought that this next coat, Azure on a bend or between an anchor inverted bendwise sinister and a mullet (argent?) three crosses (tincture?), belonging to a duke and a cardinal would be easy to find. I was wrong (and they don't appear in Rietstap's Armorial Général), though I still believe that with a little more time to devote to the research, I could track them down. 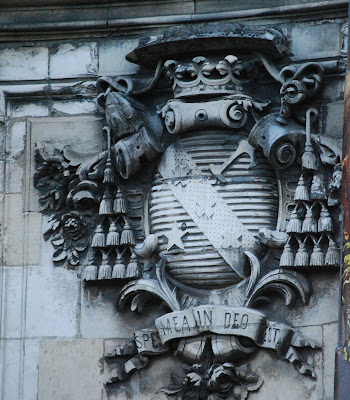 A gold field (assuming the dots on the shield are hatching) with a bordure and a bend sinister overall. An unusual arrangement of charges. 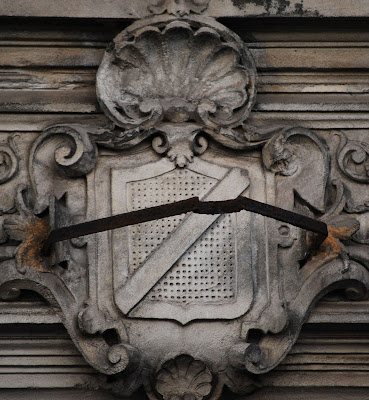 These next two coats of arms are on metal plaques in the Hotel de Ville in Arras: 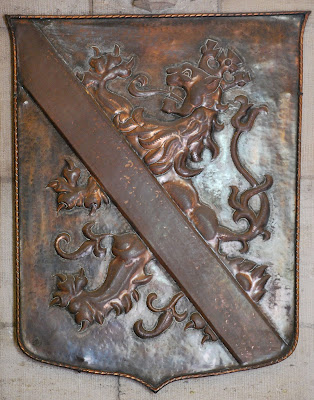 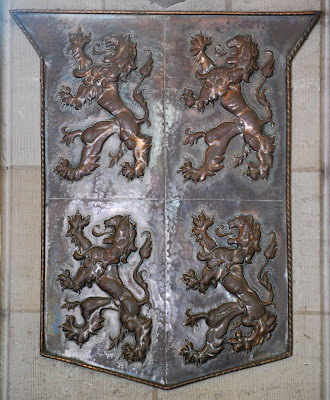 Again, if you know to whom any of these shield belong, please let us all know in the comments.