A School and Its Heraldry


Continuing our wandering about the city of Arras, France, we came across the Saint Joseph École et Collège.

(My wife, Jo, particularly liked its logo which was also displayed on the front of the building; she decided it was about time that someone recognized her as a saint.)

The school celebrated its 150th anniversary just a few years ago, so it's been around for quite a while.

But once again, it was the school's heraldry, carved in a prominent position on its facade, that really caught my eye. 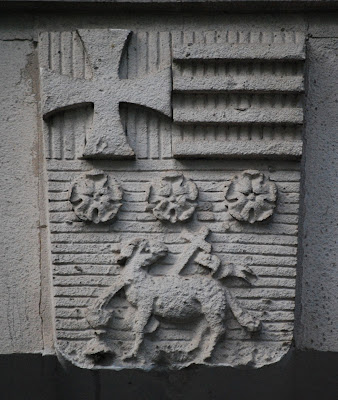 I have, alas, been unable to discover anything about this coat of arms. The St. Jo website (https://saintjo.fr/) is great if you are interested in enrolling a child there, or wish to see pictures from its 150 year history, but has no information about its heraldry. (Although in one of those historical photographs at https://saintjo.fr/150-ans/ you can see another carved rendition of the school's coat of arms over a doorway behind the fencing team.)

A guess at a blazon (in English) would be: Azure a Paschal lamb passant argent distilling blood from its neck gules into a goblet (or?) in chief three roses (argent?), a chief per pale Gules a cross formy (argent?) and Barry gules and (argent?).

It's an interesting coat of arms, and probably has a story behind its design; I just wish I knew what it was.