The Development of the Arms of Arras


In the Hotel de Ville, the town hall of Arras more commonly known by its bell tower, Le Beffroi, there is a plaque with an explanation of the development of the coat of arms of the city. 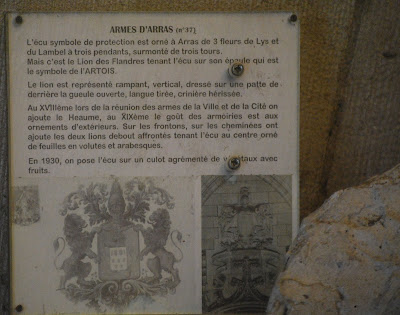 A rough English translation would be:


Coat of arms of Arras


The shield, symbol of protection, is adorned in Arras with 3 fleurs-de-lys and a label of three pendants surmounted by three towers.


But it is the Lion of Flanders which is on the shield; on his shoulder is the symbol of Artois.


The lion is depicted rampant, vertical, erect on a hind leg with open mouth, tongue sticking out, mane bristling.


In the eighteenth century at the uniting of the arms of the village and the city is added the helmet, in the nineteenth century the taste of the coat of arms is to the exterior ornaments. On the fronts, on the chimneys is added the two rampant lions holding the shield in the center adorned with leaves in scrolls and arabesques.


In 1930, the shield is hung on a pellet [roundel?] embellished with fruit.

The translation the last line may be more than bit off; they placed a screw through one of the words, and I don't know anywhere nearly enough French to be able to guess what it might be.

The plaque above is placed in the main lobby of the building, right next to some casts of a blank shield being supported by the lions. 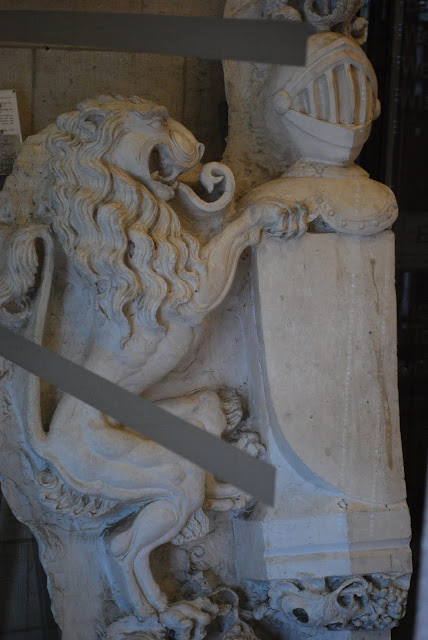 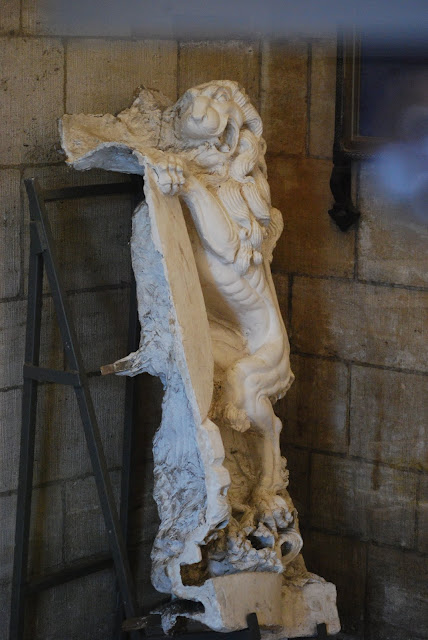 In the first picture of the dexter supporter, you can see the embellishment of fruits and leaves spoken of.

And here is the completed achievement with the shield (left blank as in the casts above), helm, and lion supporters, along with the leafy arabesques and fruits. 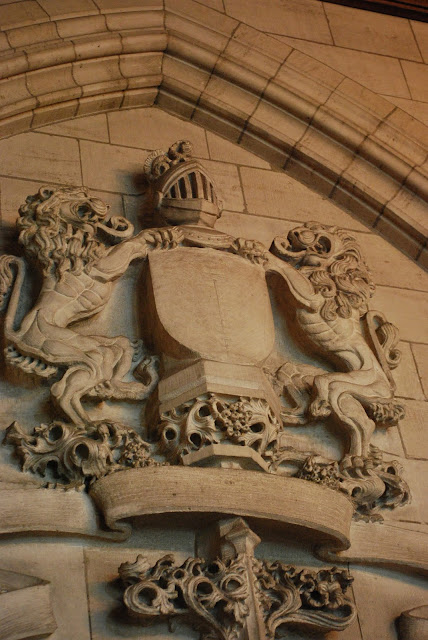 It's an amazing amount of detailed work, and doubly so when you consider that during the First World War, the city of Arras was approximately 80% destroyed, and that the Hotel de Ville, because of the bell tower and its potential use as a place for reconnaissance, was a target for German artillery. So all of this carving was done during the rebuilding and reconstruction of the city and of the building following the war.