A Nicely-Carved Achievement of Arms


Continuing our walk from St. Mary-at-Lambeth back toward the Houses of Parliament in London, we came by the Marriott Hotel, which as a sign on its facade indicates, used to be the London County Hall.

Also indicative of its former use was this carved achievement of arms: 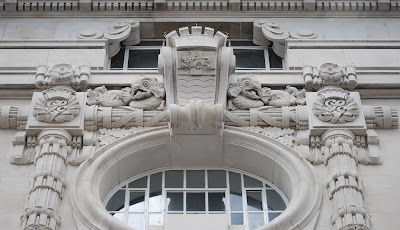 The arms are those of the London County Council, which used to meet in this building. 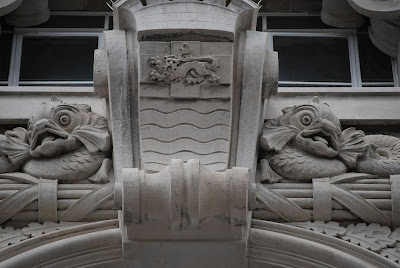 (Don't you just love those wide-eyed dolphins on either side of the shield?)

The London County Council was granted this coat of arms in 1914. The arms can still be seen on buildings constructed by the council (like this County Hall become Marriott Hotel) before its dissolution in 1965. The final design for the arms, "simple in character and in every way suggestive of the corporate life of London," was agreed by the Council on May 26, 1914.

The arms were blazoned as: Barry wavy of six azure and argent on a chief argent the cross of St George [gules] charged with a lion of England [or], the shield ensigned with a mural crown or.

The blue and silver waves represented the River Thames and the Port of London. The English lion on St. George's cross was to show that London was the "Royal centre of England," encompassing the nation's capital city. The gold mural crown indicated that the arms were those of a municipal body.

As the arms included part of the royal arms (the "lion of England," a lion passant gardant or) a royal warrant was issued granting the arms on July 29, 1914. The arms were registered at the College of Arms by letters patent dated October 20, 1914.