Continuing our review of some of the heraldry in Mount Stuart, we came across this armorial gem. 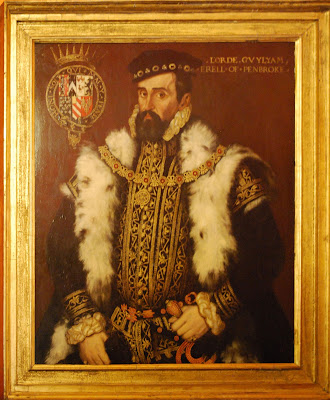 The identification of the subject is made pretty easy, as in addition to the coat of arms above his right shoulder, there is an inscription above his left:

(It is also possible, though I think less likely based on his suit, that this is a portrait of "William Herbert, 3rd Earl of Pembroke, K.G., chancellor of the University of Oxford, and lord-chamberlain of the household, b. 8 April 1580, m. 4 Nov. 1604, Mary, eldest dau. of Gilbert, 7th Earl of Shrewsbury, and co-heir to the Baronies of Talbot, Strange, Blackmere, and Furnival; but d. without surviving issue, 10 April, 1630, when the honours devolved upon his brother, Philip.") 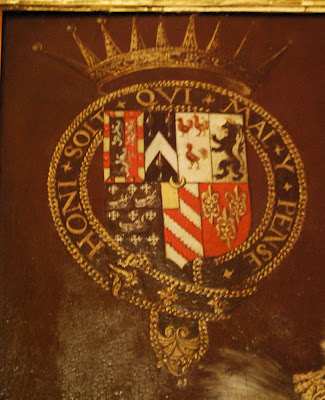 The arms, placed within the Garter (note the painting also shows him wearing the collar of the Order of the Garter), have Herbert (Per pale azure and gules three lions rampant argent, seen in other locations in Mount Stuart; for example, in the stained glass window below) in the first quarter differenced by a bordure compony. And in fess point there is a crescent or for difference, the cadency mark of a second son. 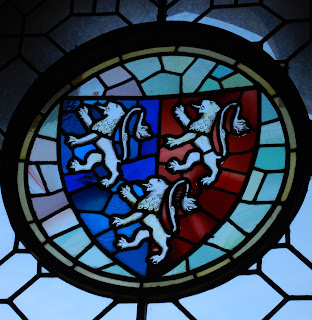 These differences - the bordure and the crescent - stem from the time the Earldom came back into the Herbert family, following it's being held by Edward Plantagenet, son and heir of King Edward IV, and then by Anne Bullen (or Boleyn), created Marchioness of Penbroke by King Henry VIII in 1532.