A Home That Is Chock Full o' Heraldry


The next stop on our heraldic tour of the Isle of Bute was Mount Stuart, the home of the Marquesses of Bute, a lovely place in which it is pretty much impossible to even turn around without seeing heraldry. Of course, when you are designing a home for yourself and you have an important lineage, you'll probably go ahead and include the family coats of arms and crests all over the place, if only to try to overawe your visitors.

Mount Stuart was originally built in 1719 by the 2nd Earl of Bute, and rebuilt by the 3rd Marquess of Bute following a fire on December 3, 1877, which destroyed much of the house. Two Georgian wings survived, but the main house was completely redone in flamboyant Gothic Revival.

But, of course, it is the heraldry which is the main attraction to me, and there was heraldry to be seen before even entering the doors, in the form of a deeply carved achievement of arms. 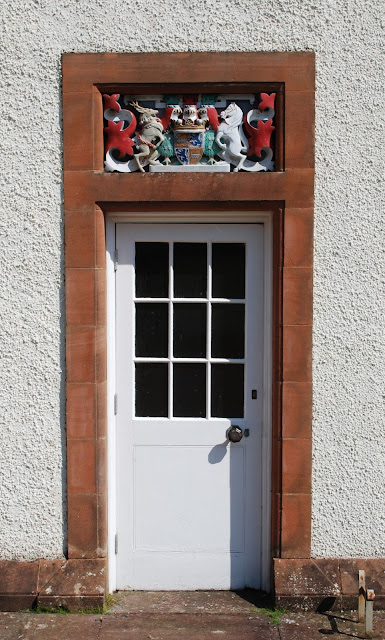 Nice, not overstated, this display is something that any armiger might consider placing over a doorway. (Of course, in my case, there would be no supporters or coronet of rank, and but a single crest instead of the three here, but still, what a great way to display a full achievement of arms!) 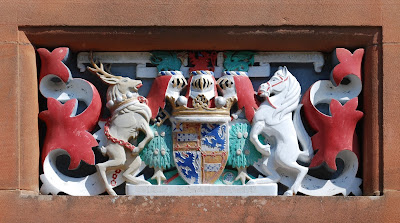 The arms are, obviously, those of the Crichton-Stuart, Marquess of Bute: Quarterly: 1 and 4, Or a fess checky azure and argent within a double tressure flory counter-flory gules (Stuart); 2 and 3, Argent a lion rampant azure (Crichton). In this example, we also have in canton the badge of a Baronet of Nova Scotia. The three crests are: (center) A demi-lion rampant gules (Stuart); (dexter) A wyvern issuing fire from its mount all proper (Crichton); and (sinister) A wyvern proper holding in its mouth a sinister hand couped gules (Herbert). The supporters are: A stag proper attired or and A horse argent bridled gules. (The stag here is gorged with the coronet of a marquess proper chained gules, but those elements do not appear in the blazon in my copy of Burke's Peerage, which book also reverses the supporters so that the horse is the dexter supporter, and the stag the sinister one.)

We have seen all of these elements recently, in the display of the arms of John Crichton-Stuart, the 5th Marquess of Bute, that we saw in the Bute Museum and shared in our post dated February 26, 2018. (Note that the arrangement of the supporters in that display is reversed from the supporters here.)

If you look closely (you can also click on the image above to see a larger copy), you can also see the crossed key and tower on a staff behind the shield which we also saw on the display in the Bute Museum.

Watch for more examples of the Stuart, Crichton, and Herbert arms and crests as we make our way through Mount Stuart in the next several posts here.