A Final Coat of Arms at the University of Glasgow


Before moving along to our next venue in Glasgow, there is one more coat of arms to consider.

It is placed on the exterior of a building, in the same doorway as the arms of Bishop William Turnbull, whom we have already considered. 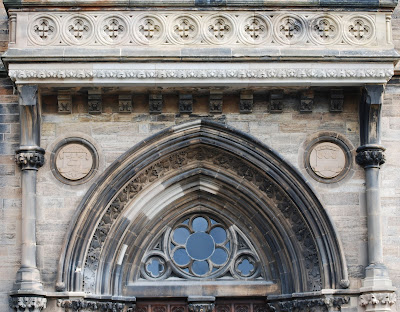 (I must say, that's a great place to display a pair of coats of arms! But I digress ...)

Based on the date on the scroll across the lower part of the shield, 1870, I have to assume that these are the arms of James Graham, the Fourth Duke of Montrose, who was Chancellor of the University from 1837 until his death in 1874, Or on a chief sable three escallops or. 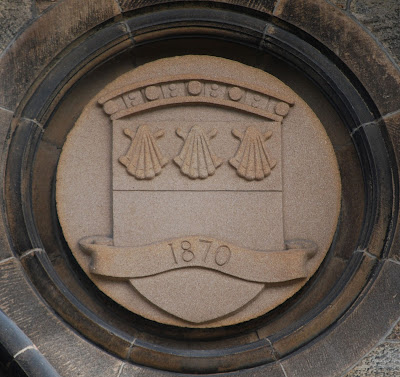 The date commemorates the move of the University from the "Old College" on High Street in Glasgow to the new site on Gilmorehill (where it remains) in November 1870.

I am unsure about the coronet atop the shield. It is not the coronet of a Duke. It comes closest to a Lord of Parliament in the Scots Peerage, but that coronet is the same as that of a Baron, which has four pearls (large white roundels) atop the upper rim, not five pearls contained within the circlet, as here.

That question aside, what a wonderful display of heraldry, commemorating a major event in the history of the University.