Following our tour of the University of Glasgow, we all marched down the hill to the Kelvingrove Art Gallery and Museum. 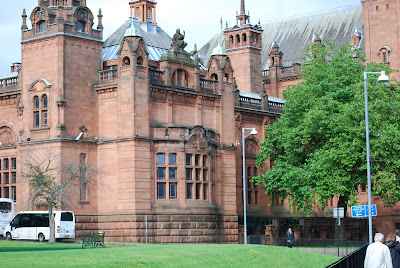 It's a big place, with a most eclectic collection. I mean, really, in one of the main halls there were stuffed birds and animals on one side (including an elephant!), some silver pieces on the other side, and overhead a Spitfire Mk XXI.

But the biggest display of heraldry, and non-heraldry, was on the exterior of the building.

Today, I thought I'd share the non-heraldry with you, and then get into the major display of heraldry that goes all the way around the building. 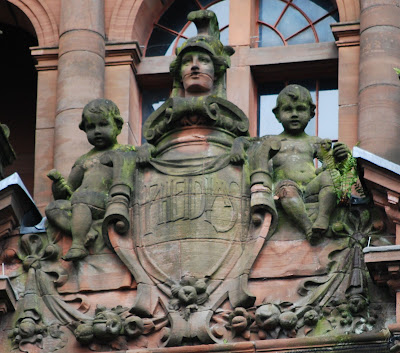 First, of course, since it's both large and over a main doorway, is this tribute to Pheidias or Phidias (480-430 B.C.), a Greek sculptor, painter, and architect, creator of one of the Seven Wonders of the Ancient World, his statue of Zeus at Olympia, and who was the director of the construction of one of the most famous buildings in the world, the Parthenon in Athens. 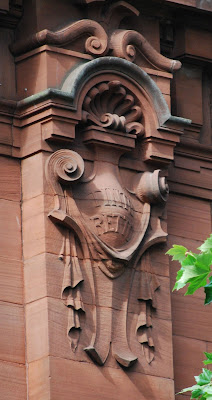 Another non-heraldic display on a shield bears the name of the Venetian Renaissance painter Tintoretto (1519-1594).

And then there's this blank shield with a roundel containing an imperially crowned lion's face above it.

All really cool, and very nicely carved, but despite the shield shapes, not really heraldry now, is it?

Join us next time for that!