A Piece of Royal Worcester Heraldry


The article itself doesn't seem to have a whole lot to do with heraldry; it's about the 200-plus year old diary of one of the founders of Royal Worcester porcelain, John Flight, and how it details how he went to France following the revolution there in 1789 to spy upon French porcelain makers and steal their secrets.

But if you scroll down to near the bottom of the article, they have a picture of a piece from a breakfast set made by Royal Worcester in 1804 for then-Baron (Horatio) Nelson of the Nile, with his doubly-augmented coat of arms on it (along with his two crests). 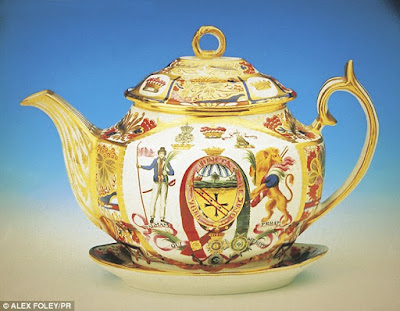 If you are interested, this old (2012) article, "Diary of Royal Worcesters porcelain maker details how he STOLE trade secrets from French potters after Revolution," can be found on the website of the Daily Mail at http://www.dailymail.co.uk/news/article-2178330/Royal-Worcester-porcelain-Remarkable-diary-porcelain-maker-1791-details-stole-trade-secrets.html#ixzz3i83vlVYY

And on that note, I will leave you with one of my favorite heraldic poems, from C.W. Scott-Giles' volume Motley Heraldry, with his take on the Nelson arms:


These arms the Nelsons bore in days of old:
A black cross flory on a shield of gold,
And over all a bendlet gules, to show
Due difference from Samson and Lamplow.

When one Horatio Nelson rose to fame,
With ‘Sir’ and ‘K.B.’ bracketing his name,
The Kings of Arms his scutcheon did resplend
With three exploding bombs upon the bend.

Later, they gave Lord Nelson of the Nile
An augmentation in a lavish style –
A ship disabled and a fort destroyed
(Which probably the Baron much enjoyed.)

When Viscount Nelson of the Nile at last
Beyond the reach of earthly honours passed,
His brother (made an Earl), the heralds gave
The golden word TRAFALGAR on a wave.

The shield is a fine biographic gloss,
But where, alas! is Nelson’s ancient cross?