“A Vainglorious Display of Arms”


There is in the floor of the Temple Church in London, under glass (or plexiglass; either way, it's thick enough to walk on, though I didn't) and lit from the sides, a monument to several members of the Littleton family: Edward, Thomas, and another Edward.  I found it to be a wonderful heraldic display, but not everyone seems to share my enthusiasm for it.  Simon Bradley and Nikolaus Pevsner in their book London: The City Churches describe it as a “Brass of Edward Littleton, 1664, with a vainglorious display of arms.”  Hence the title of this post.

The monument contains a total of 29 separate coats of arms, so I will probably break them down over several posts, instead of trying to do all of them in a single (overwhelming) one. 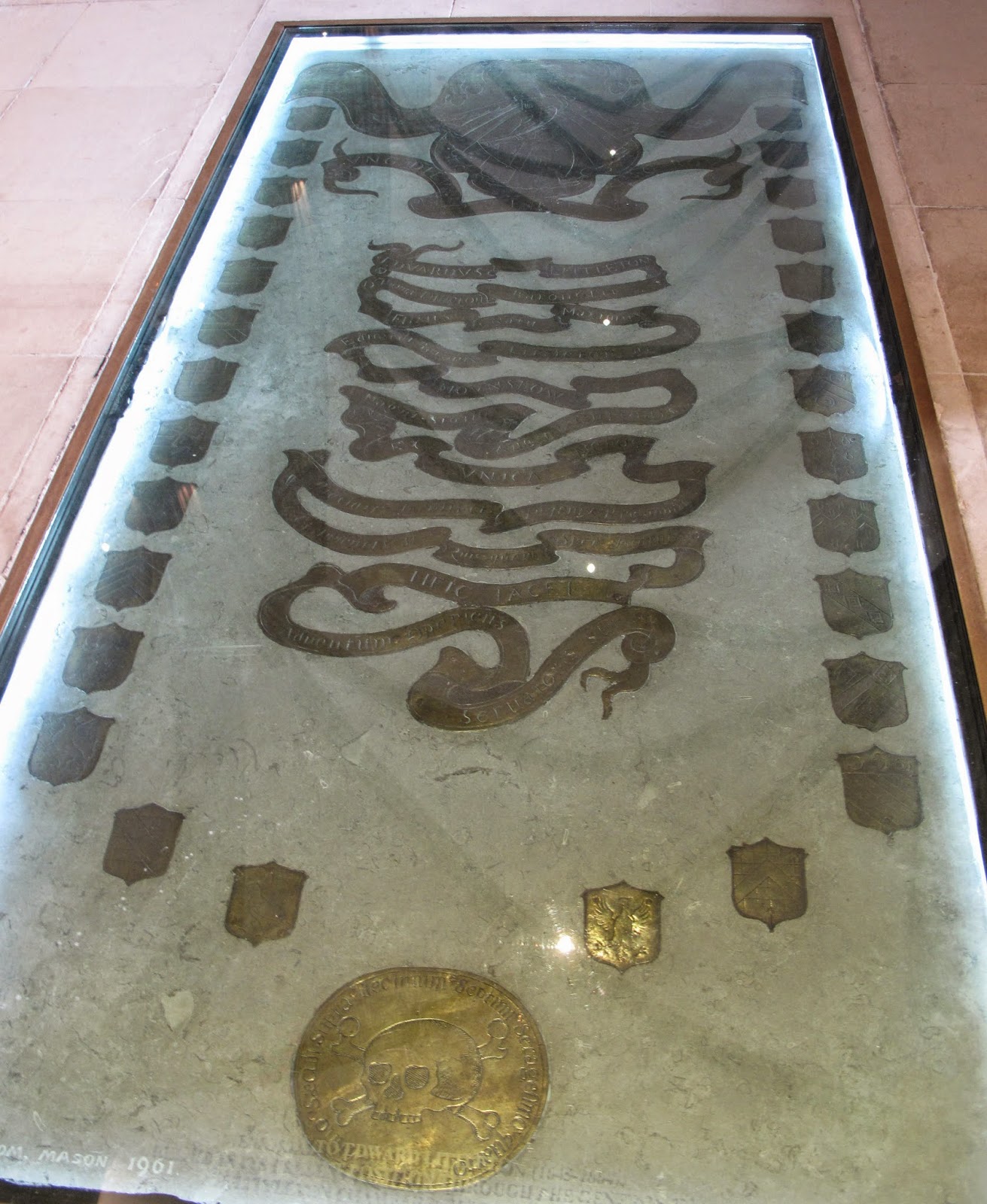 As you can see from the overall picture of the monument, there is a representation of the Littleton arms at the top, with a long and flowing scroll beneath it, and accompanied by 28 small brass coats of arms down each side and into the bottom.

Philip Kerr, Rouge Croix Pursuivant and heraldic adviser to the Monumental Brass Society in the 1930s, identified the large shield as that of Littleton of Frankley, differenced with the label of an eldest son; for the line from the great judge through both Edward’s grandfathers. The shields on the left record the genealogy of Sir Adam, the first baronet of Littleton of Stoke Milborough; the shields on the right relate to the family of Sir Adam’s wife, Ethelreda, daughter and heiress of Thomas Poyntz of North Ockenden in Essex. (Monumental Brass Society, Bulletin 126, June 2014, p. 506) 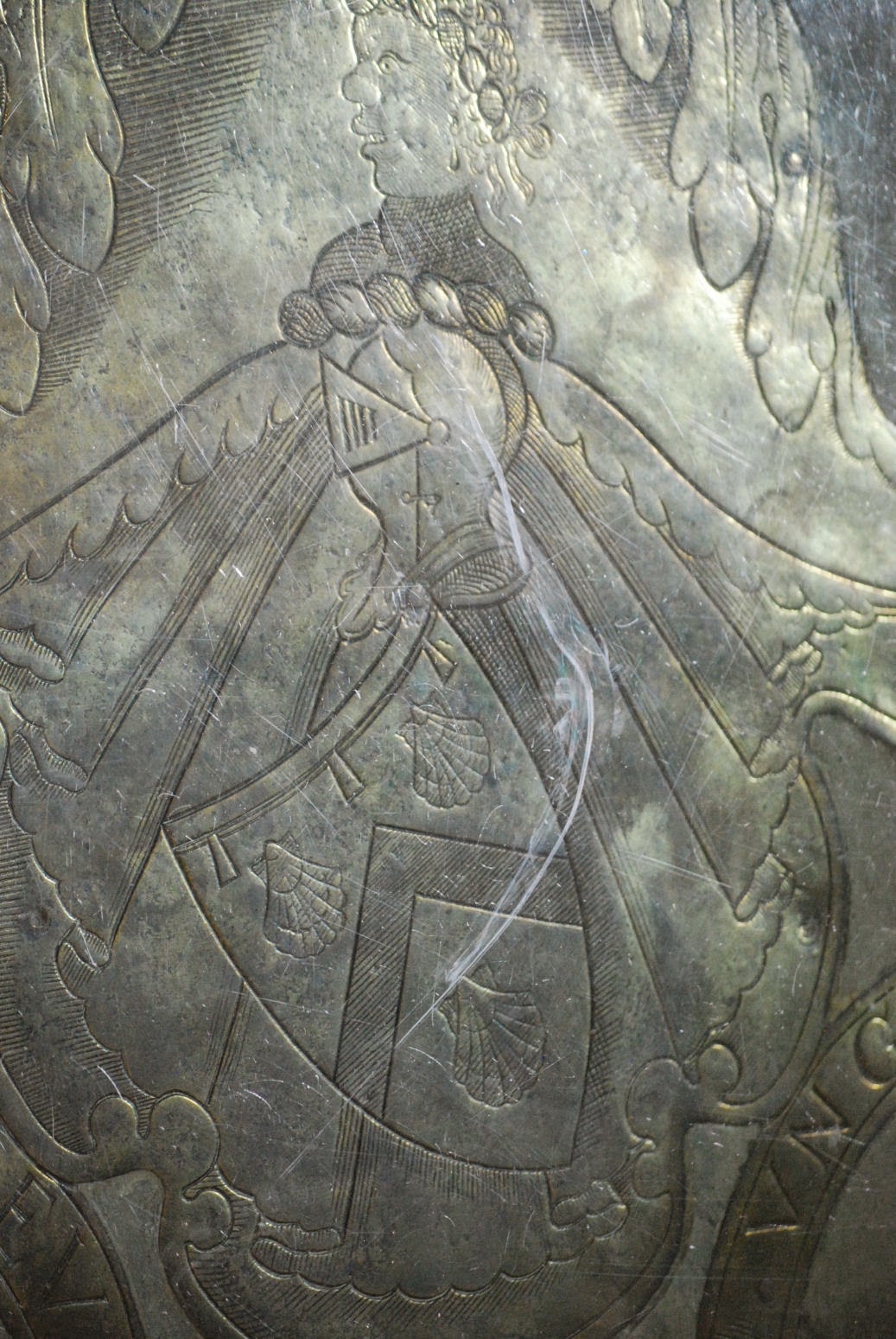 The arms are blazoned Argent a chevron between three escallops sable, a label for difference.
The Littleton (or Lyttelton) arms as found in Burke’s General Armory are entered as follows:

Lyttelton (Baron Lyttelton; Sir Thomas Lyttleton, Knt., of Frankley, Judge of Common Pleas, author of "The Treatise on Tenures," d. 1481, leaving three sons: I. Sir William Lyttleton, Knt., of Frankley, ancestor of the Lords Lylletton; II. Richard Lyttleton, ancestor of Littleton. Bart., of Pillaton, extinct, and of Lord Hatherton; III, Thomas Littleton, Esq., of Spetchley, ancestor of Littleton, Bart., of Stoke Milburgh, extinct, and Lord Lyttleton, of Mounslow, extinct). Argent[gent] a chev[ron] betw[een] three escallops Sable[ble]. This family also bears the following quarterings: 1st, ar[gent] a bend cotised sa[ble] a bordure engr[ailed] gu[les] bezanty, for Westcote ; 2nd, gu[les] a lion ramp[ant] and a bordure engr[ailed] or, for Talbot; 3rd, ar[gent] six fleurs-de-lis, three, two, and one, and a chief indented or, for Paston; 4th, France and England quarterly, within a bordure gobony ar[gent] and az[ure], for Beaufort. Crest—A Moor's head in profile couped at the shoulders p[ro]p[e]r. wreathed about the temples ar[gent] and sa[ble]. Supporters—On either side a merman p[ro]p[e]r. in the exterior hand of each a trident or. Motto—Ung Dieu, ung roy.

The following illustrations are a portrait of Baron Littleton by Van Dyke and an engraving of Sir Thomas Littleton.  Just so you know some of the players here. 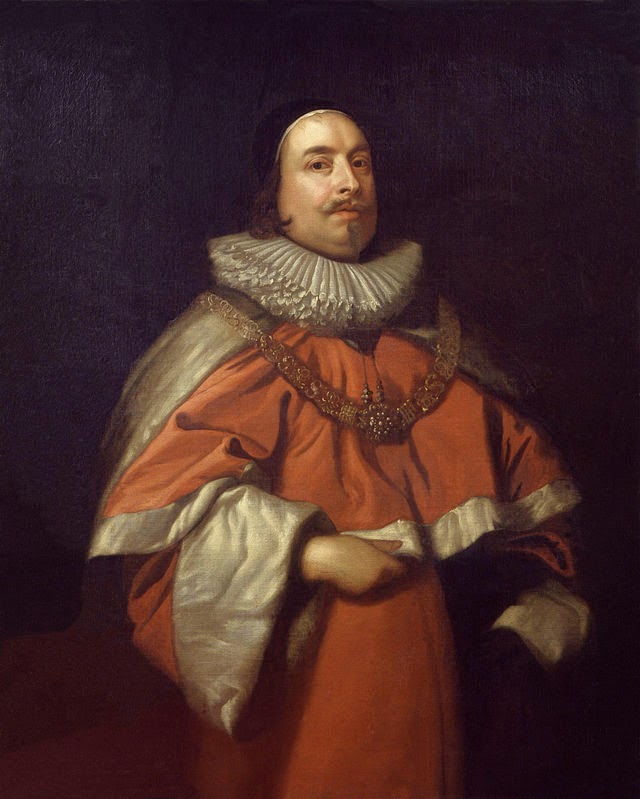 There is a fair bit of biographical information about various members of the Littleton family on Wikipedia and in the Dictionary of National Biography, so I’m not going to repeat all of that here.  Suffice it to say that the family was a prominent one, including barons, baronets, knights, statesmen, and a keeper of the Great Seal of England.

The legend on the scroll beneath the arms on the memorial is:

(I apparently missed photographing the last two twists of the scroll, and I’ve been unable to find a transcription of their text anywhere else I’ve looked.  Sorry!)

Ignoring for now the 28 small shields (we’ll start discussing those in the next post), at the bottom is a roundel with a skull and crossbones with the legend Anno Sæculi Supra decimum Septimi Sexagefimo quarto.  (The “f” in Sexagefimo is, of course, most likely the “long ess” which we would nowadays write as Sexagesimo.) 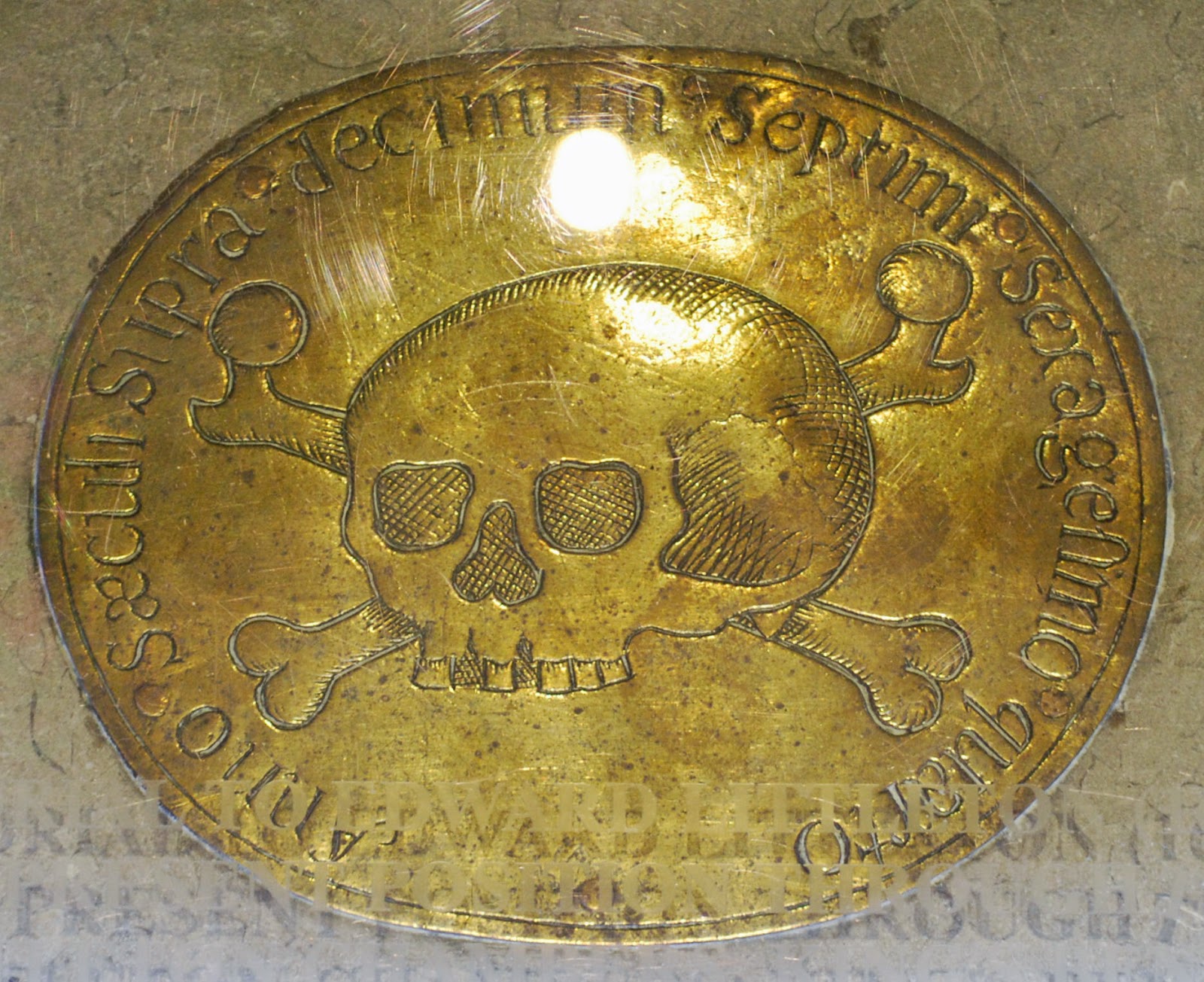