The Symbolism in One City's Coat of Arms


A book in the Images of America Series entitled Kinston, by Nina Moore (Arcadia Publishers, Charleston, South Carolina, 2002), gives the history and symbolism of most of the various charges and emblems in the coat of arms of the City of Kinston, North Carolina. 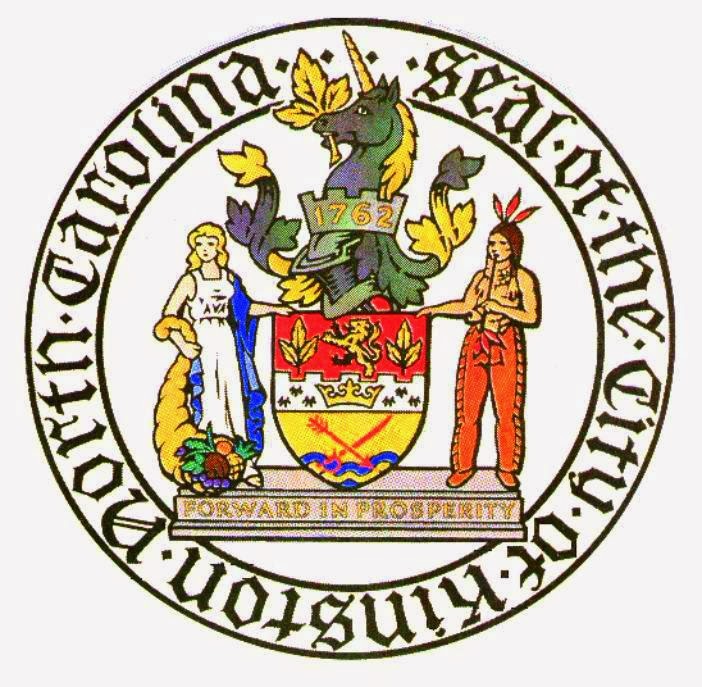 These arms were granted to the City in 1960 by the College of Arms in London, following a campaign by Marion A. Parrot, who was influenced by the fact that when he was stationed in England during WWII, he noticed that all of the towns in that country had their own coat of arms. Since Kinston was about to celebrate the 200th anniversary of its founding in 1762, he thought that his city should have a coat of arms, too.

According to the book Kinston, "[t]he crown int he middle represents Kinston's original name of Kingston in honor of King George III.  The gold lion symbolizes courage and fortitude, and the two sprigs of golden tobacco refer to Kinston's principle [sic] industry.  Reminiscent of the Tuscarora War, a sword and an arrow are crossed on the bottom.  The blue and white waves under the cross sword and arrow are the River Neuse upon which the Town of Kinston is situated.  The female figure on the right [well, heraldic "right," or dexter] holds a cornucopia, representing prosperity, and on the left [heraldic "left," sinister] stands a Native American, a brave of the Neuse Tribe, smoking a 'pipe of peace."

I didn't find anything to explain the meaning of the unicorn's head crest, nor of the ermine fess.

The City of Kinston is the county seat of Lenoir County, North Carolina, which has its own coat of arms.