For those of you with an interest in heraldry, heralds, and Shakespeare, and especially if you live on (or can get to) the eastern coast of the United States, The Folger Shakespeare Library in Washington, DC is going to be having an exhibition this coming summer and fall entitled "Symbols of Honor: Heraldry and Family History in Shakespeare's England." 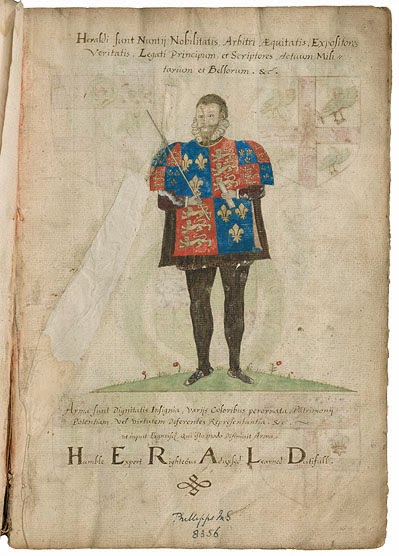 The exhibit will run from July 1 through October 26, 2014, and looks to be something of interest of heraldry enthusiasts.  The overview of this exhibit on the Folger's website describes it as follows:

Discover the colorful world of heralds and their rivals, all competing to profit from the craze for coats of arms that seized England during the reign of Elizabeth I. An ambitious world was full of newly wealthy and successful families, eager to display their success and status. Genealogy in its modern form also took off: ancestral research was vital to a rich heraldic display, and new ways were established for setting out family trees graphically.
In this show-the largest and most comprehensive of its kind ever mounted-you will see pedigrees and family trees, books explaining heraldry's complex rules, manuscripts illustrating actual coats of arms, and documents written by professional heralds seeking to regulate heraldic practise in a fast-changing society. Exceptional treasures include the original drafts of William Shakespeare's own coat of arms.

Then it (successfully) tries to pique our interest further by telling us to "Discover the colorful world of heralds and their rivals during the reigns of Elizabeth I and James I."

The illustration above from the promotional materials for the exhibit is from one of those "manuscripts illustrating actual coats of arms," the "Alphabet or blazon of arms."

Unfortunately, as much as I'd like to see this exhibit, I'm not certain that I'll be able to make it there; I may be flying over the east coast later this summer, but flying over isn't the same as visiting, and while I am scheduled to give a presentation nearby, that's not until December, well after the exhibit has closed.  If you can make it, by all means do!  I may have to settle for buying a copy of the catalog when it becomes available.  (I'll start checking the Folger Library's website for it beginning in July.)