A co-worker of my wife recently took a trip to Japan, and came back with proof positive that something I have said many times is still true: "You can find heraldry everywhere!"  Even in countries without a strong heraldic tradition (with the exception of their own system of clan and family insignia, mon), like Japan.

Anyway, on one of his receipts from there, he found the following "coat of arms:" 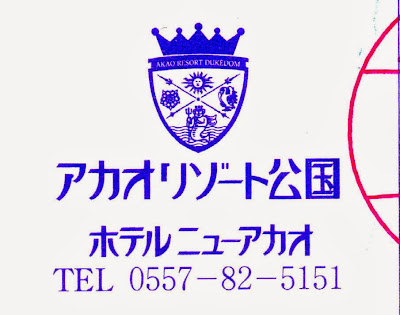 It's from "The Akao Resort Dukedom," which is, as their website explains, "located in the heart of nature Nishikiga-Ura enclosed by the sea and the mountain, and consists of two hotels of 'Hotel New Akao' and 'Royal wing' and four facilities of 'Akao Herb & Rose Garden' and 'Akao Beach Resort' on a vast site of about 750,000m2. It is resort that genuine nature outspread before you."  http://www.i-akao.com/foreign_en/aboutus.html

If I had to blazon it, it would be something along the lines of: Argent two spears in saltire between in chief a sun in his splendor, in dexter a rose, in sinister an eagle rising, and in base a mermaid issuant from waves of the sea in base Azure.

Who'd have thought of looking for heraldry, or at least a coat of arms-like logo, in Japan?  It's true; you can find heraldry everywhere!

Email ThisBlogThis!Share to TwitterShare to FacebookShare to Pinterest
Labels: Japan