We were at the movie theater the other day (catching the latest Riddick movie, if you must know) and on the way out I saw a somewhat ambiguous poster for a movie being released sometime next year.  What first caught my eye, of course, was the large shield shape that was the central image on the poster. 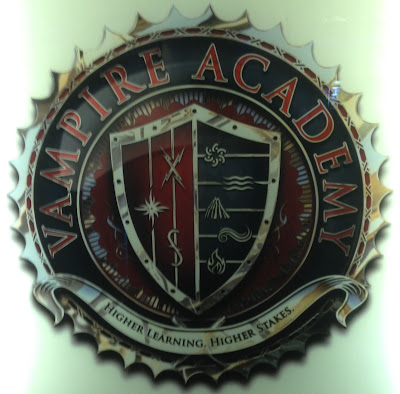 It's for a movie entitled Vampire Academy, which according to the storyline synopsis over at IMdB will have good vampires fighting bad vampires and a heroine who is half-vampire/half-human.  Not really my cup of tea, I must say.

But the "coat of arms" on the poster certainly got my attention.  Some of the symbols on the right (sinister) side are clearly for the "elements" of water, earth, air, and fire.  I'm not at all certain what the top one is supposed to represent.  (Though it does remind me somewhat of the flower of the Hong Kong Orchid Tree which appears on the flag of Hong Kong, only with six-part symmetry instead of five petals.  http://www.crwflags.com/fotw/flags/hk.html)  And I'm not at all certain of the ones on the left (dexter) side: crossed lightning flashes, but with what meaning?  Neither the sun-like object nor the spiked or thorned S is familiar to me, either.

So while I'll probably end up giving the movie itself a miss, I do find the attempt at some sort of pseudo-heraldry as "arms" for the Academy to be interesting.  Because, after all, it's always fun to run across heraldry - good, bad, or indifferent - in the movies.